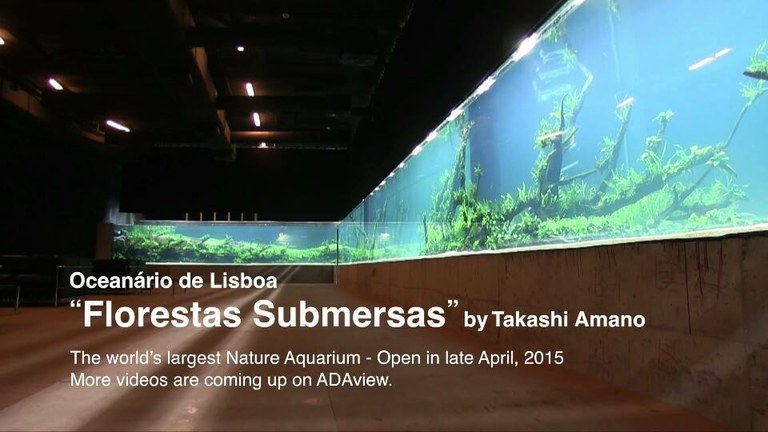 The following article was written by Luca Galarraga for AquaA3 (click to read the original Portuguese version) and republished in partnership with AquaA3. Luca Galarraga is an award-winning aquascaper, respected judge at aquascaping competitions, and co-owner of Aquabase. Translation credit: Victor Mykulak

The world’s biggest planted aquarium will be in Portugal

Live image of the tank by Filipe Oliveira.

On April 22, 2015, the Lisboa’s Oceanarium will inaugurate its newest exposition, “Underwater Forests” by Takashi Amano.

The genius Takashi Amano, creator of Nature Aquarium, surprised the world of aquascaping once again when he accepted the challenge to create the biggest planted aquarium in the world for the Lisboa’s Oceanarium in Portugal.

[ADA Newsletter] Oceanário de Lisboa Vol.6: “They state this exhibition as offering an “experience of contemplation, relaxatio, and “simplicity.” The gigantic tank is 40 meters long containing 160,000L of fresh water, presenting the world of tropical forests and the water systems. In front of the enormous and stunning Nature Aquarium, you can feel the magnificence of ecosystems as if you are part of the balance of Nature.”

The numbers are very impressive: 40 meters long (in a “U” shape), 2.5 meters width, and 1.5 meters high, with the capacity to hold approximately 160,000 liters of water (about 42,267 US gallons). An important design detail is that the exhibit is positioned 70 cm above the ground, which makes the aquarium sit at the perfect position for the public viewing. This is the biggest “nature aquarium” in the world, created by Takashi Amano, and the first of its type at Lisboa’s Oceanarium with the Amano’s signature.

Here is a time-lapse of the largest planted aquarium in the world:

In this project, we used approximately:

In the layout, the volcanic rocks were used to hold up the elevated plateaus, where the completed substrate system was set up (layers of rocks, pumice, ADA Power Sand Special and ADA Aquasoil Amazonia), separating the planted areas from the sand areas. The driftwood were the main stars, forming impressive groups, most of the time covered by moss or other plants.

The lighting system is composed of seventy (70) HQI 800W lights with a mix of color temperatures from 6,000ºK and 10,000ºK. Four massive filters with mechanical and biological media will be used. The circulation devices have not been revealed yet. More details about the tank such as its CO2 system, fertilization, and maintenance will be revealed over time.

The layout was started on January 28th and was finalized on February 2nd. Several European aquascapers took part in the project along with a huge team of Takashi Amano’s employees. According to aquascaper Filipe Oliveira, there were three groups – Portugal, ADA Japan, and ADA International – that merged into one big team.

The Lisboa’s Oceanarium expects that the grand-opening of what is so far the most ambitious project of its history in April, 2015.  Portugal is now part of the most-go-list places for every aquascaper and nature lover!

The mysterious traits of ozone (03)