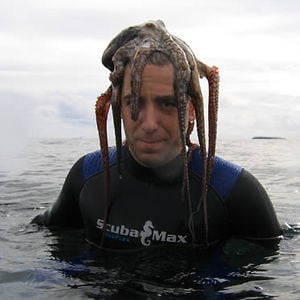 It’s World Octopus Day, and Rich Ross, a husbandry biologist specializing in cephalopods and coral at the California Academy of Sciences’ Steinhart Aquarium, is a guest host today on Reddit’s Science Ask Me Anything!  I urge you to head over to the website with any questions you may have about octopus, coral, reef tanks, or, in his words, ” juggling, martial arts, glassblowing, and hairless dogs.”

His biography (on Reddit) gives us some idea of the breadth of his knowledge and the passion that he brings to his endeavors:

I keep weird and unique animals thriving and breeding in aquariums, as well as do fieldwork on coral spawning and animal-collection for display and animal-behavior studies. Cephalopods are the coolest animals on the planet (3 hearts, blue blood, ring-shaped brain, related to snails, like something from a Harryhausen movie and secretly plotting to take over the world), and I’ve been working with them for almost 20 years. I was the first to close the lifecycle of the dwarf cuttlefish, and my colleagues and I recently published a paper on the breeding and behavior of the currently undescribed Larger Pacific Striped Octopus—an octopus that does things very differently from other octopuses (like beak-to-beak mating).

You can also reach him any time on twitter and on packhead.net