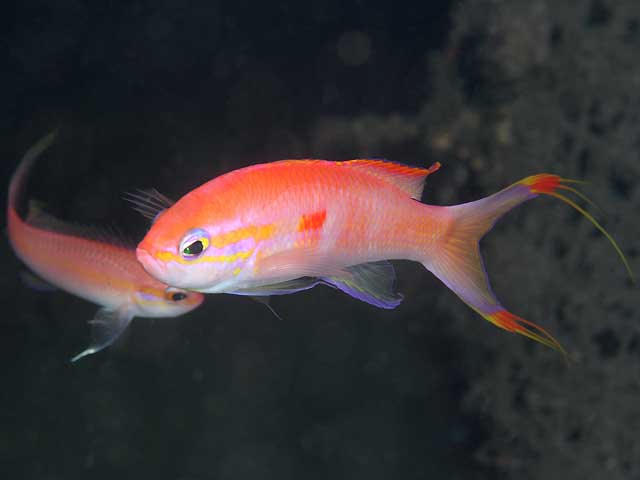 The anthiines of the Indo-Pacific are home to numerous genera, most of them noted for their exuberance and sheer brilliance. These charming basslets are notoriously well known for their dazzling display of opulence; compounded to that is the sheer numbers in which many of these occur. Take, for example, the polyphyletic Pseudanthias and the numerous species that plague the reefs in a swirling buzz. From Acropora dominated drop offs, where Mirolabrichthys school in tandem, to twilight zones where Odontanthias skulk in silence. In almost all suitable habitats and depths along a well diverse reef, you’ll find some kind of anthiine. One genus, however, takes residence in a habitat far removed from this familiar sight. It is Tosana.

Tosana is a monotypic genus with only one described species, Tosana niwae. The species is regionally endemic to the South China Sea, and is documented fairly regularly from Japan and Taiwan. The species’ habitat preference is unusual, adopting a likeness for silty-muddy bottoms in deep coastal waters, far removed from any Acropora or sun-spangled coral gardens. As a specialist in this microhabitat, it is joined by few other fauna, but other benthic, silt loving fishes from the genera Ptereleotris, Hoplolatilus, Callionymus and Osopsaron can be found in close sympatry. Because of this relatively unexplored habitat, coupled with its predilection for deep water, it is likely that T. niwae has a distribution much larger than previously known. It should be looked out for in the costal waters of Vietnam and the Spratly Archipelago. There is a single record from Bali, but that is likely to be anomalous and erroneous. 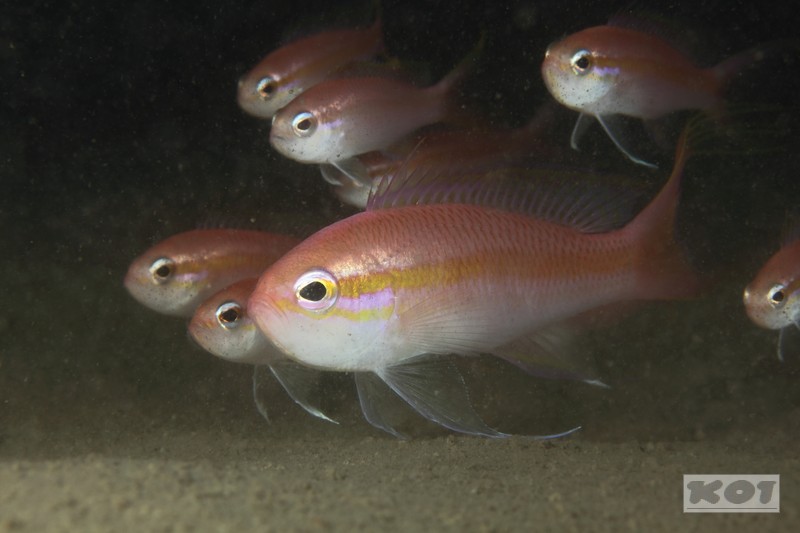 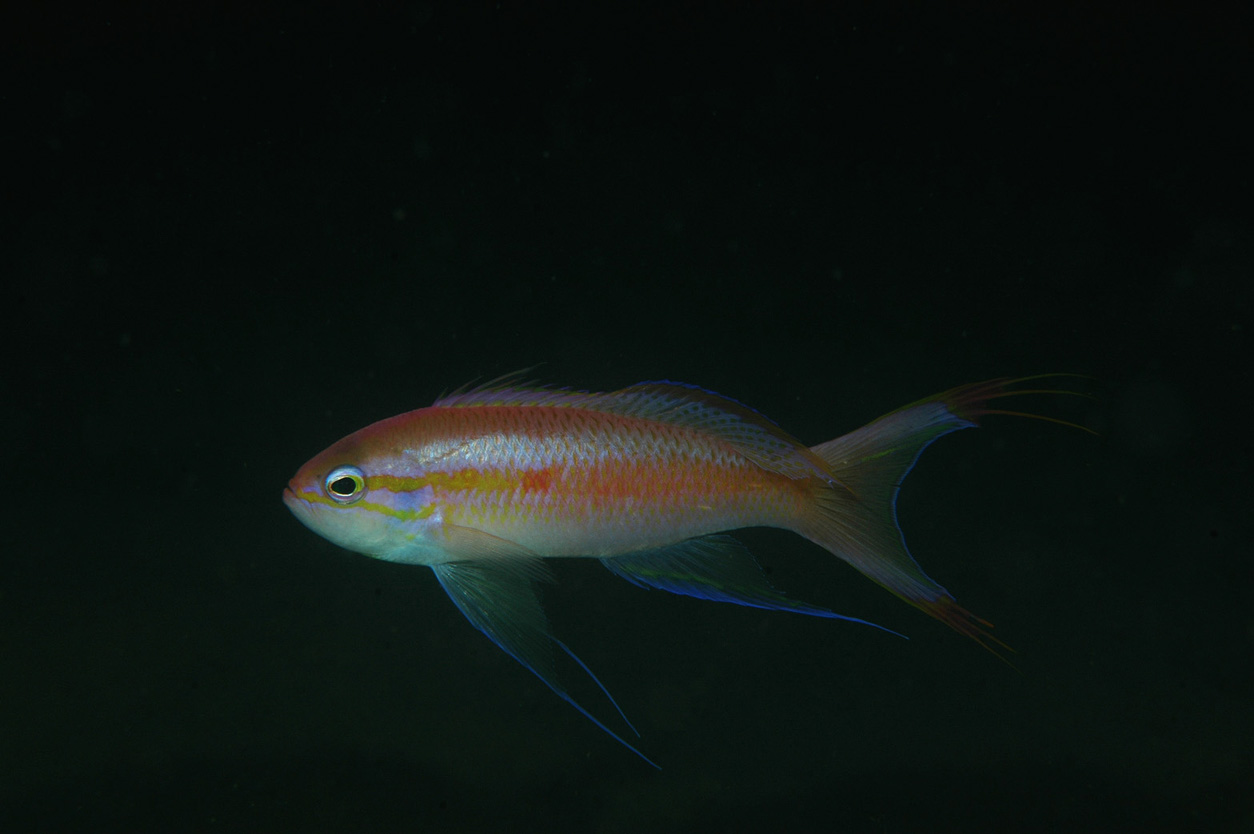 Like most anthiines, T. niwae is sexually dichromatic. Females are relatively drab, and are steely pink with a horizontal yellowish-brown stripe extrapolated from the upper eye stripe. Males are mostly sakura pink to peach, with the usual stripe broken up into a bright red medial blotch placed just beyond the pectoral fin.

Perhaps the most fascinating morphological aspect lies in the caudal fin, where both upper and lower lobes are tipped in carmine, and decorated in wispy filamentous tresses. This unique synapomorphy is shared with very few in this family, but two noteworthy, and largely Japanese, species are also in possession of this trait. The genus Tosanoides, with its two species (T. flavofasciatus and T. filamentous), also sport the unusual caudal filamentation. In this aspect, both genera are fairly similar; Tosanoides is the amalgamation of the genus Tosana, and the greek word “êidos”, suffixed to “oides”, which means “likeness”, and together, the genus literally translates to “Tosana-Like”. It is also noteworthy of mention that Pseudanthias rubrolineatus also possess these caudal filaments, perhaps suggesting a more complex, yet to be determined phylogenetic relationship with the previous two. 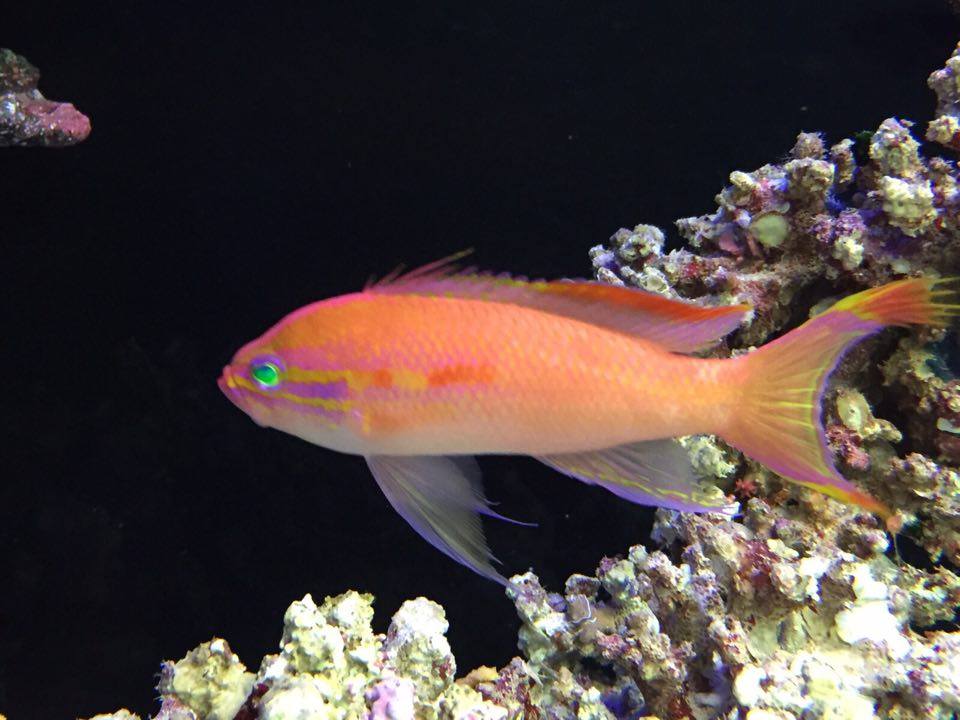 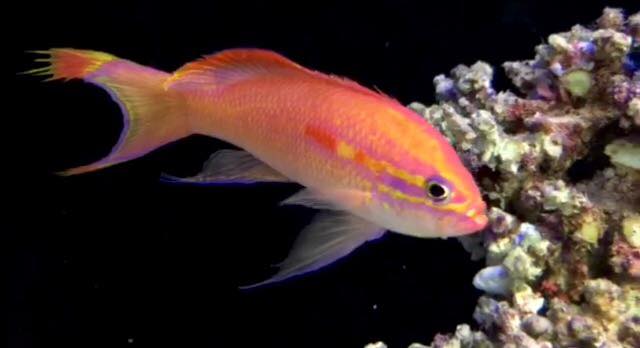 In captivity, Tosana is exceedingly rare. This is in part due to the obscure habitat in which it prefers, coupled with its penchant for deep water. More specimens appear in trawler nets as bycatch, than they do intentionally for the aquarium trade. Rarely, specimens caught this way arrive in salvageable conditions, where they get tossed a lifeline from optimistic aquarists. The only specimen I know that is living in great health today belongs to a man, in which I am quite fond of, living in the outskirts of Osaka, in Nara, Japan. 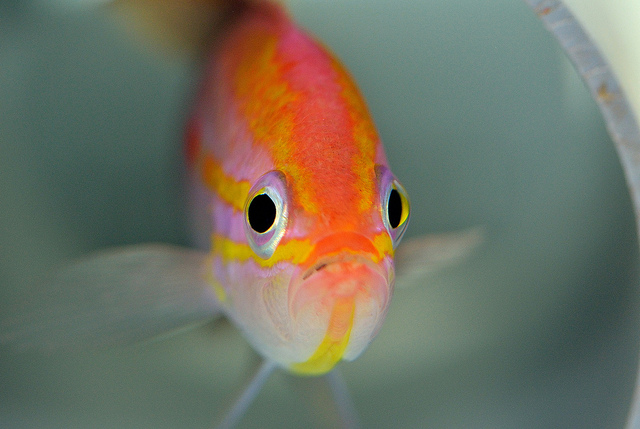 The same fish back in 2014, in Quarantine. Photo credit: Lemon TYK.

Dr. Shimokobe, in my opinion, owns one of the most complete and amazing collection of deepwater fish anywhere in Japan. I’ve visited and recounted his collection a number of times in the past, but something that I have never been able to fully appreciate in person is Tosana niwae. When I visited him last year in 2014, this same stallion of a male was still in quarantine, and so I only managed a frontal profile of its face. Today, one of my friends paid Dr. Shimokobe a visit, and together with Koji Wada, took a spectacular video of the same fish now in display. Revel in the glory of Tosana niwae, the undisputed, opalescent, queen of the benthic silt.