The death of this coral sea snake has been greatly exaggerated 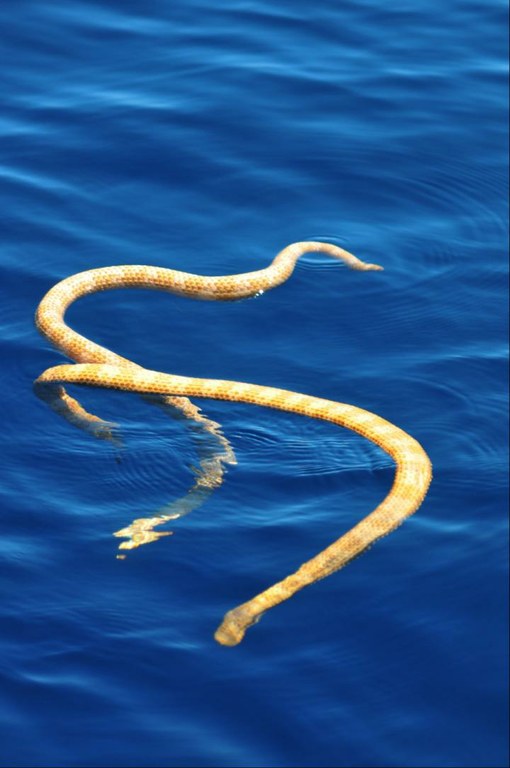 Scientists from James Cook University have discovered two critically endangered species of sea snakes, previously thought to be extinct, off the coast of Western Australia.

It’s the first time the snakes have been spotted alive and healthy since disappearing from their only known habitat on Ashmore Reef in the Timor Sea more than fifteen years ago.

“This discovery is really exciting, we get another chance to protect these two endemic Western Australian sea snake species,” says study lead author Blanche D’Anastasi from the ARC Centre of Excellence for Coral Reef Studies at JCU.

“But in order to succeed in protecting them, we will need to monitor populations as well as undertake research into understanding their biology and the threats they face.”

The discovery of the critically endangered short nose sea snake was confirmed after a Western Australia Parks and Wildlife Officer, Grant Griffin, sent a photo of a pair of snakes taken on Ningaloo Reef to Ms D’Anastasi for identification.

“We were blown away, these potentially extinct snakes were there in plain sight, living on one of Australia’s natural icons, Ningaloo Reef,” says Ms D’Anastasi.

“What is even more exciting is that they were courting, suggesting that they are members of a breeding population.”

The researchers also made another unexpected discovery, uncovering a significant population of the rare leaf scaled sea snake in the lush seagrass beds of Shark Bay.

The discovery was made 1700 kilometres south of the snakes only known habitat on Ashmore Reef.

“We had thought that this species of sea snake was only found on tropical coral reefs. Finding them in seagrass beds at Shark Bay was a real surprise,” says Ms D’Anastasi.

Both leaf scaled and short nosed sea snakes are listed as Critically Endangered under Australia’s threatened species legislation, which means they have special protection.

Despite the good news of the find, sea snake numbers have been declining in several marine parks, and scientists are at a loss to explain why.

“Many of the snakes in this study were collected from prawn trawl by-catch surveys, indicating that these species are vulnerable to trawling,” says Dr Vimoksalehi Lukoschek from the Centre of Excellence for Coral Reef Studies.

“But the disappearance of sea snakes from Ashmore Reef, could not be attributed to trawling and remains unexplained.

“Clearly we need to identify the key threats to their survival in order to implement effective conservation strategies if we are going to protect these newly discovered coastal populations,” Dr Lukoschek says.