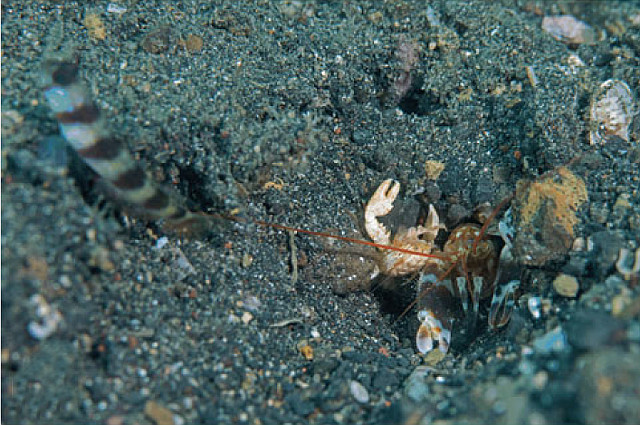 Coral reefs are full of intimate interspecies relationships—from the well-known dalliance of clownfishes with anemones, to the more obscure romance of Epizoanthus and eunicids, or the awkward ambling of Heteropsammia and its sipunculan courtesan—the ocean, it would seem, is full of odd couples. But these pale in comparison to the prurient polyamory recently discovered in the murky depth of Sulawesi between goby, shrimp and crab. *gasp* 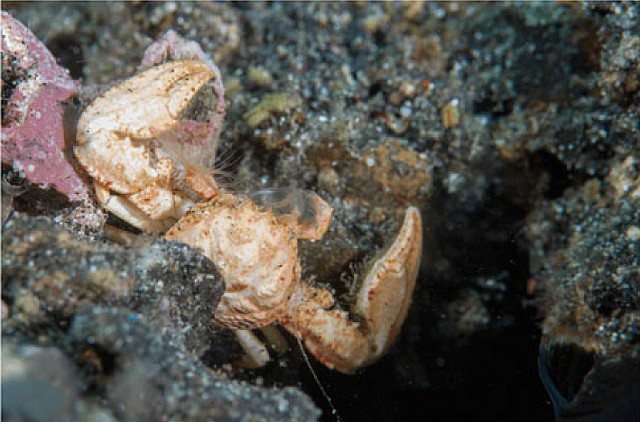 The libidinous little fishes in question are none other than the familiar aquarium shrimpgobies Amblyeleotris and Cryptocentrus, renowned for their fascinating symbiosis with certain species of Alpheus pistol shrimp. In captivity, most aquarists limit this pairing to a single goby and shrimp, but it’s actually far more common in the wild to find them shacked up in mated pairs. Things can get cozier still, as it’s not terribly unusual for an additional shrimpgoby species of dartfish to enter the picture, resulting in some rather overcrowded living conditions. Now, a newly published study has added yet another creature into the mix: an obscure species of porcelain crab which challenges the notion that two’s company, three’s a crowd. 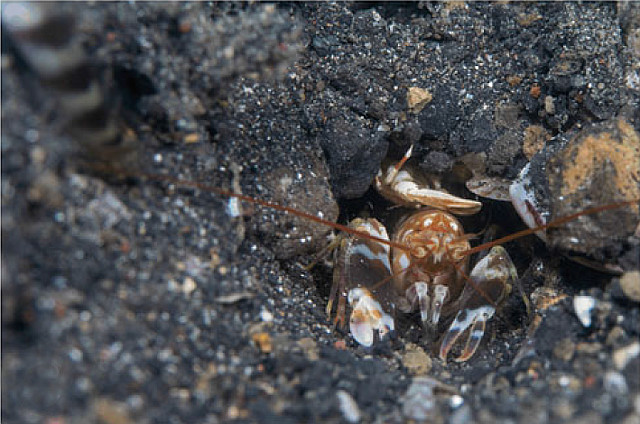 Enosteoides lobatus is not a name which is likely to ring any bells amongst aquarists, especially since it was only just described in 2009. This rather diminutive crustacean bears all the hallmarks of more familiar aquarium porcelain crabs (such as Petrolisthes galathinus & Neopetrolisthes ohshimai) but without any of the aesthetic appeal. Small in stature and chromatically challenged, this pallid beastie remained overlooked until it was discovered poking its head out from a few burrows in the famed Lembeh Straits of Sulawesi.

Observed in situ, it’s reported that Enosteoides perches near the opening of its burrow, where it fans the water with its specialized mouthparts in the manner typical of these crabs, filtering out whatever organic particulates happen to pass it by. The burrow entrance naturally provides better access for feeding, but with the decided disadvantage of exposing the crab to the risk of predation. To mitigate this, it remains in close contact with the resident pistol shrimp and follows it back down to safety when alerted to do so. 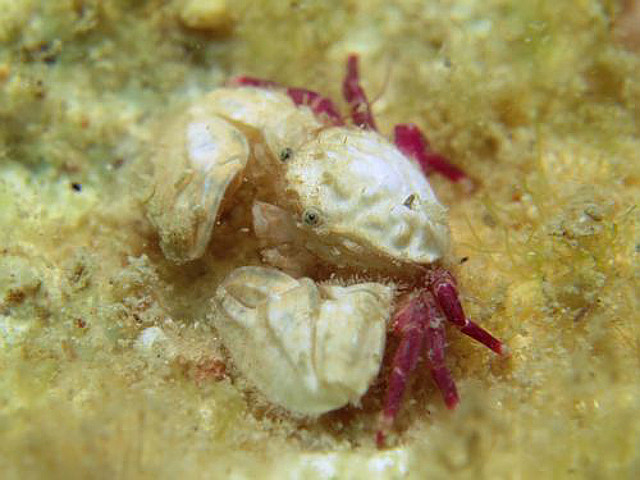 This magenta-legged species is not associated with gobies and has been identified by Japanese divers as being E. palauensis. Credit: Dolphin Kick Dive Shop

Seeing as this porcelain squatter appears to go unnoticed, it would seem that neither shrimp nor goby minds the presence of this third wheel. If Enosteoides has any direct benefit to its hosts, it isn’t clear what this might be. It’s plausible that its presence outside the burrow helps it to act as an additional sentry for the domicile, but, in all likelihood, the relationship is merely commensal, providing no real tangible benefit to either shrimp or goby. 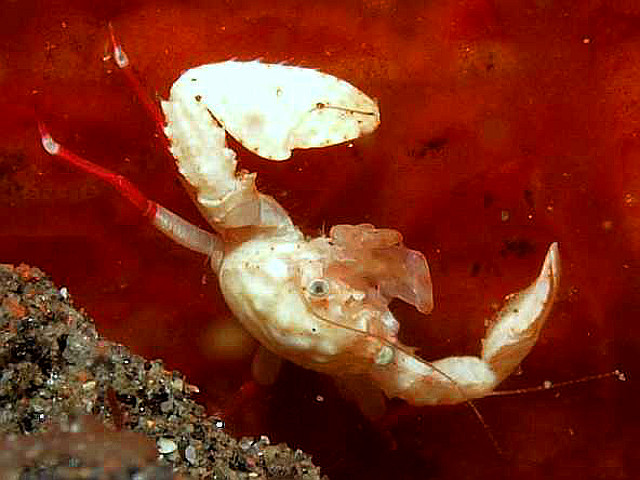 This unidentified Enosteoides was seen under rocks in Indonesia, where up to a dozen were said to be found together. The color of the legs is slightly different from E. lobatus. Credit: ryo

Needless to say, this minute beige crab has yet to be collected for the aquarium trade (the same can be said regarding the other four species in this genus, which are reported to lead cryptic lives beneath rocks). It is a bit surprising that this goby-shrimp-crab symbiosis hasn’t been observed previously, as it’s all but certain that they coöccur elsewhere in the Coral Triangle, in areas where aquarium collection takes place. Are collectors merely overlooking this crab? Or, more likely, do they just assume that we in the aquarium hobby aren’t interested in purchasing such a diminutive and drab species? Given how popular shrimpgobies and pistol shrimps are, it seems there would be at least some market for Enosteoides lobatus, as surely I’m not the only one interested in seeing these three cavort about in a nano tank…