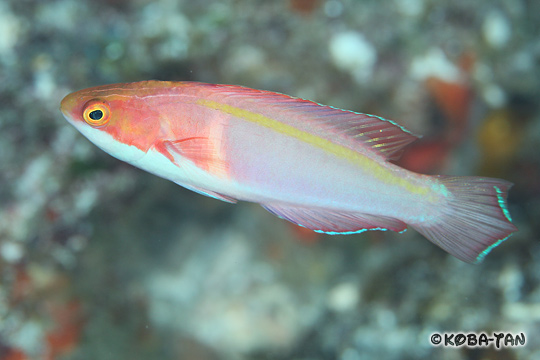 The Cirrhilabrus fairy wrasses represent one of the most diverse and beloved groups of reef-associated fish, popular with both aquarists and divers alike for their beautiful colors and spectacular mating displays. There are currently more than fifty species recognized and several other potentially undescribed populations in need of further study. LemonTYK and I recently completed an exhaustive review of this genus, but, as is often the case, something new and unexpected has come to light—an unidentifiable fish representing either a new species or a previously undocumented hybridization. 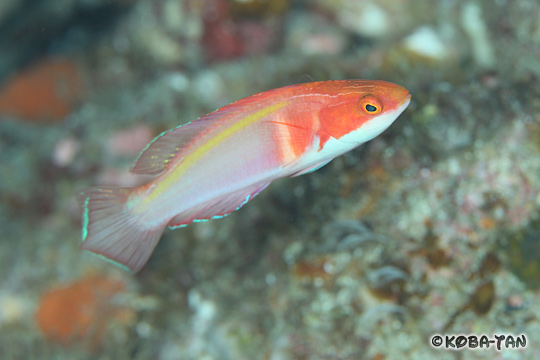 The fish in question was observed at the Ogasawara (=Bonin) Islands, an isolated archipelago located roughly midway between Tokyo and Guam. This regions sits at the confluence of several distinct faunal ecoregions—Japanese, Micronesian, Hawaiian—and appears to possess a higher rate of endemism than is usual, lending it the evocative appellation “Galapagos of the Orient”. It’s most famous resident is perhaps Genicanthus takeuchi, a fish found nowhere else outside of this small island group and which, given its limited biogeographic range, I have hypothesized as potentially representing an example of hybrid speciation. 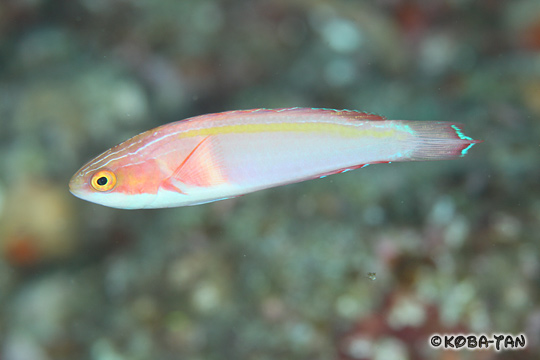 Only three fairy wrasses have previously been documented at Ogasawara—the Japanese endemic C. lunatus, the true Japanese C. temminckii, and the taxonomically confused species C. katherinae (which is likely restricted to the Mariana Arc). Further north, around mainland Japan and the Izu Islands just south of Tokyo, a variety of other fairy wrasses can be found, including C. katoi, C. lanceolatus, C. cf lanceolatus, C. cf exquisitus, C. melanomarginatus and C. rubrimarginatus. 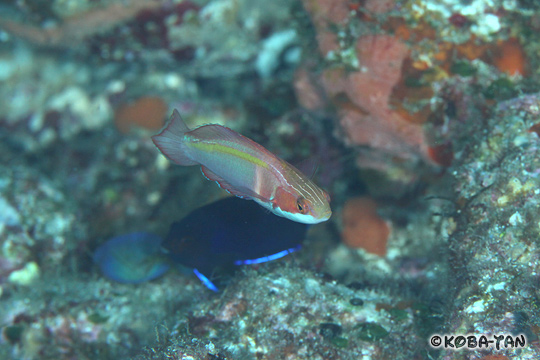 Note the greyish color along the sides in this photo. Credit: Shuichi Kobayashi

It’s evident that the mysterious fish documented in these photographs isn’t representative of any of the three known species from Ogasawara, nor any of the other Japanese taxa. The combination of a weakly lanceolate caudal fin (found in C. lanceolatus and C. cf lanceolatus), a sharply demarcated red & white coloration to the head (seen to varying extents in C. temminckii, C. katherinae & C. katoi) and a prominent yellow dorsal stripe makes this fish impossible to place. Adding to this difficulty is the sex of this specimen, which, based on the fine white lines along the back, is either a large female or a recently transitioned male. 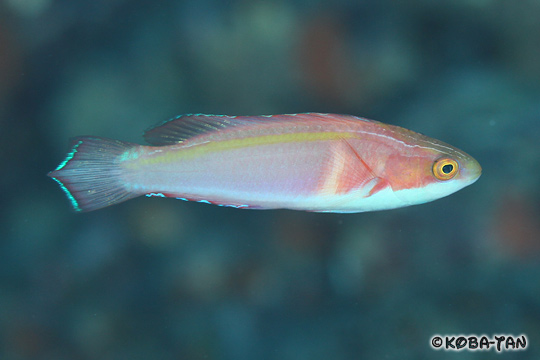 Even more bizarre is the “hooded” patterning of this fish, extending just past the base of the pectoral fin and ending in a pale oblique marking superimposed upon the underlying red coloration of the head. We can find similarities to this pattern elsewhere in the genus, with perhaps the closest example seen in the obscure Mauritian endemic C. sanguineus, which belongs to a widespread complex of parapatrically distributed species found across the Indo-Pacific, from the Red Sea to Hawaii and French Polynesia. These wrasses, which I’ve dubbed elsewhere as the Cirrhilabrus lanceolatus Group, share several features in their patterning: 1) solidly colored dorsal and anal fins 2) a prominent dorsal stripe 3) a tendency towards developing lanceolate caudal fins 4) short pelvic fins 5) a non-reflective caudal fin. And, in examining our mysterious Ogasawaran specimen, we can likewise find all of these traits. 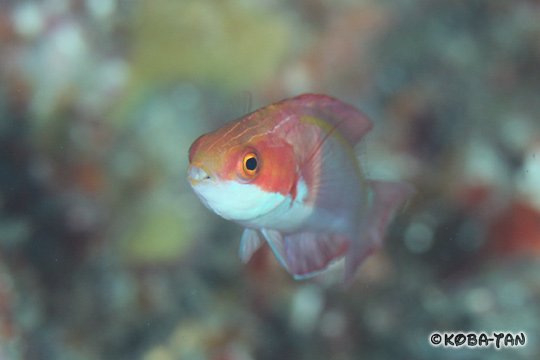 So what are we to make of this fish? Might this be a legitimate species, endemic to Ogasawara, which has only just now been discovered? Or perhaps this fish is a northern waif from the Mariana Islands, a region which could also conceivably possess its own endemic member of the lanceolatus Group, though, strangely, none has been found there to date. Neither of these hypotheses seems particularly compelling, as both of these regions have been extensively explored by divers and scientists alike, but deepwater fairy wrasses like this can be difficult to find in their natural habitat—evidenced by the recent discovery a species from the Great Barrier Reef, Cirrhilabrus squirei—so it’s not entirely impossible that this fish has simply been overlooked until now… it’s just a bit implausible.

Perhaps the most likely scenario, considering the unique nature of this specimen, is that it represents a rare hybrid involving at least one member of the C. lanceolatus Group. Given the shape of the caudal fin, it’s plausible that C. lanceolatus itself is involved (though this species has apparently not been found here before). 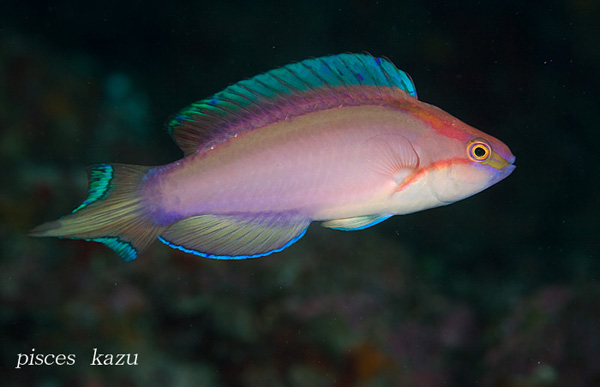 Cirrhilabrus lanceolatus shares many similarities with the Ogasawara fairy wrasse, including a lanceolate tail and a yellow dorsal stripe (faintly visible beneath the magenta stripe in this specimen). Credit: pisces_kazu

It’s difficult to speculate what the other parent might be, but I’ll put forth another crazy idea… the Hawaiian endemic Cirrhilabrus jordani. This might not be as far-fetched as it seems, as Japan and Hawaii do share some similarities in their ichthyofauna. Recall that Centropyge interrupta (a primarily Japanese species) is also known from the northwestern islands of the Hawaiian Archipelago, while the Yellow Tang Zebrasoma flavescens (a predominantly Hawaiian species) stretches west into Japanese waters. The seamounts separating these two regions are, as you might imagine, little-studied, and it would not be unreasonable to assume that a species like Cirrhilabrus jordani might be a regular inhabitant beyond its currently known range. 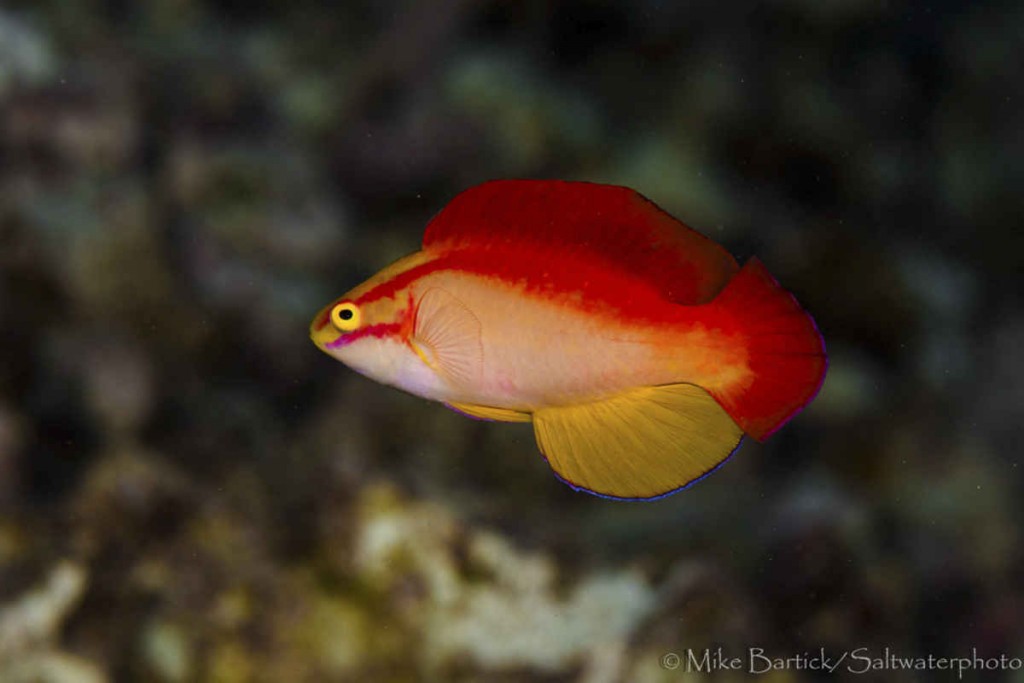 The Hawaiian Flame Wrasse Cirrhilabrus jordani is probably a longshot as a hybrid parent species, but there are some similarities in its reddish coloration. Credit: Mike Bartick/Saltwaterphoto

When we examine this mysterious Ogasawaran fish, we can see parallels to C. jordani in its overall reddish hue, as well as the faint hint of paired red stripes behind the eyes, while the lanceolate tail hints at jordani’s apparent close relative, C. lanceolatus. But, as tantalizing as this theory is, it does have one fatal flaw—neither of these species have been seen before at Ogasawara. If it turns out that both are transient visitors to these islands, waifing over on rare occasions and hiding in the depths, it would not be unreasonable to assume that they might hybridize, though it seems even less likely that we would stumble upon their hybrids before finding either of the parent species. 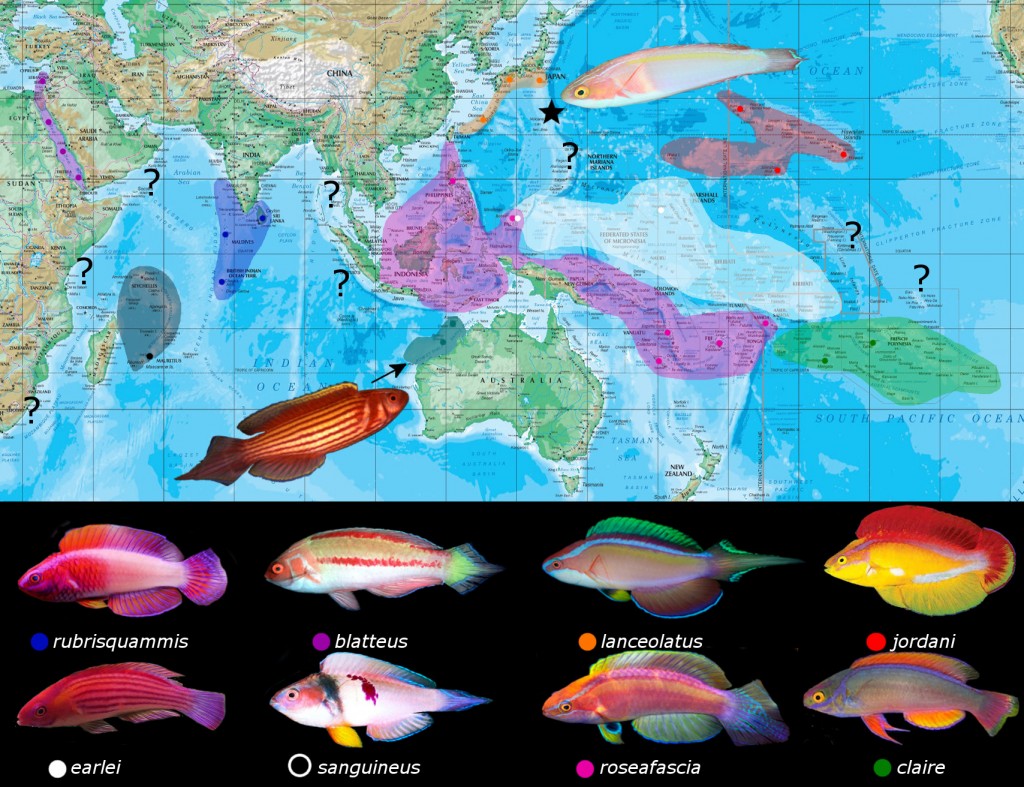 Ultimately, what’s needed is an actual specimen of the “Ogasawara Fairy Wrasse” and some extensive genetic research to tease apart what’s going on here, though, unfortunately, at the present time Cirrhilabrus is sorely lacking in this type analysis. Until more examples of this strange and beautiful fish turn up, we can only look on and wonder. Is this a new species? Is this a hybrid?  ¯\_(ツ)_/¯