Aquarium Installs Longest Acrylic Window In The US 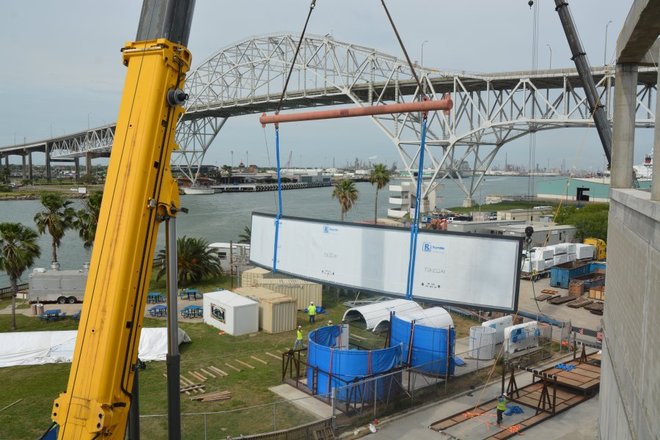 With summer fast approaching, you may be looking for a place to take the kids for a vacation. Why not get your aquarium fix in at the same time? One place that is sure to be on my must see aquarium list is the Texas State Aquarium, which has just installed the longest acrylic window in the United States for it’s new H-E-B Caribbean Shark exhibit. The exhibit is part of the Caribbean Journey Exhibit, a 70,000 square foot, $55 million dollar expansion. The H-E-B Caribbean shark exhibit will feature over a dozen large sharks and a multitude of marine fish, and will be the focus point of the Caribbean Journey. Coming in at 759 square feet, the panel weighs over 42,000 pounds and is nine inches thick. This enormous viewing panel is actually made up of eight smaller panels, that are chemically bonded, making the seams nearly invisible. The panel was manufactured by Reynolds Polymer Tech of Grand Junction, Colorado, one of just a handful of suppliers of acrylic viewing windows for public aquariums. If you walk through an aquarium tunnel somewhere in the world, there is a good chance it was made by these guys. Next time you are beside a similar panel at your favorite aquarium, look closely and see if you can detect the seams.  MORE