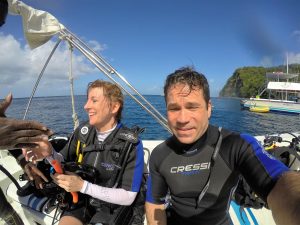 Christine is an open-water SCUBA diver

We return, refreshed from our holiday break. Gary stayed home and enjoyed family while Christine flew to St. Lucia, learned how to SCUBA dive, and visited some real reefs. This week we learn what it’s like as a beginner to earn an open-water SCUBA certification. It’s not as daunting as it appears. If SCUBA is in your dreams, this podcast will get you over the hump. Download the podcast here, or subscribe to our podcasts at iTunes. Also, follow us on Twitter at reefthreads.—Gary and Christine

Behold, The First Images Of A Live Ruby Seadragon!