Palythoa sp. This colony has the highest concentration of palytoxin ever recorded. Credit: Sawelew et al. 2018

Palytoxin sure has been getting a lot of bad press lately. Last week, there was the widely reported story of a British family, along with four firefighters, who had to be hospitalized following exposure. A couple weeks before that, Reefbuilders featured a harrowing tale entitled “Palytoxin Nearly Killed my Family and Pets”. And this month’s edition of CORAL Magazine has an in-depth review by Massimo Morpurgo, whose research has found that activated carbon neutralizes palytoxin.

But all this negative PR may have to give way to a new narrative. A groundbreaking study, recently uploaded to the bioRxiv repository, suggests that palytoxin is “the most powerful anti-cancer cardiac glycoside ever reported”. Cardiac glycosides are a type of anti-cancer drug that work by attacking the sodium-potassium (NaK) pump found on the plasma membrane of cells, causing them to swell and burst. Palytoxin was shown to be effective at doses that measured just a few picomoles, whereas other drugs in this class needed a dosage up to 100,000 times greater. This helps to explain why it takes so little of the substance to sicken aquarists and emphasizes just how dangerous it is to keep them in captivity.

Palytoxin is also remarkably efficient at differentiating between cancerous and non-cancerous cells, killing them in vitro at a rate of 1,000,000:1 (i.e. for every healthy cell which died, one-million cancer cells were also killed). The authors state that this is “the broadest differential cytotoxicity of potent NaK ligands ever reported”… though imagine this will come as little consolation to those aquarists unfortunate enough to have experienced palytoxin poisoning.

Still, there’s much that we don’t understand here. For instance, the precise way in which this molecule is bonding to the NaK pumps is yet to be determined, but it appears to differ from that seen in similar drugs. It’s also unknown exactly how this particular palytoxin compares structurally to others—there are, in fact, many types of palytoxins, and their oncological usefulness is no doubt heavily influenced by their atomic and isomeric makeup. 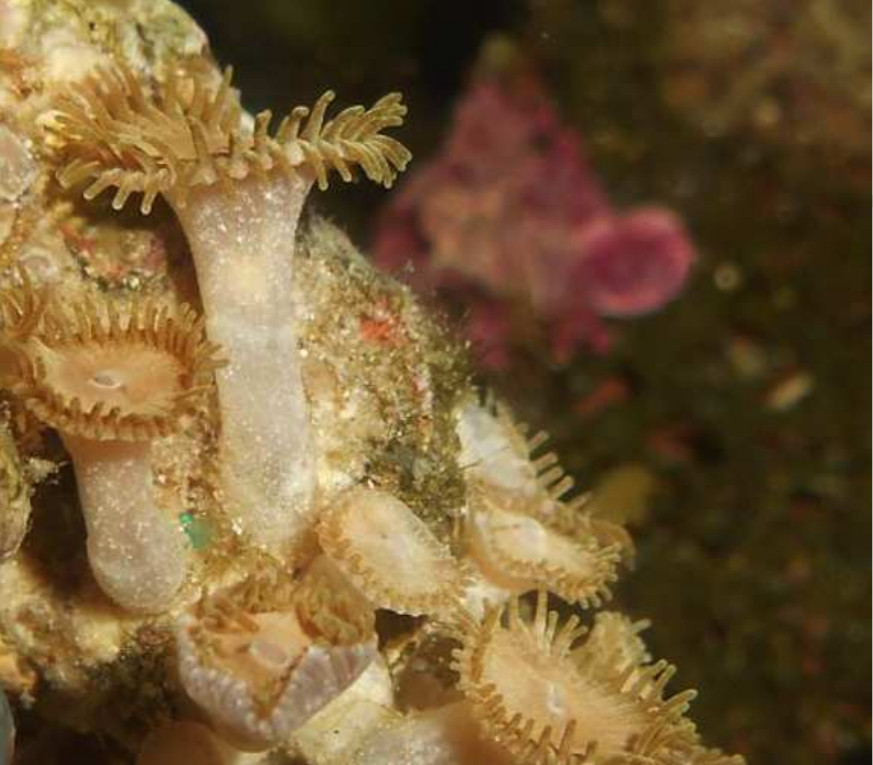 This unidentified brown Palythoa caused significant corneal damage to an aquarist. It appears to be P. mutuki, based on the capitulary ridges of the closed specimen, which would represent the first record of this species causing palytoxin poisoning. Credit: Farooq et al. 2017

And then there is the tricky matter of identifying which species of Palythoa this particular toxin came from. The specimen used here originated from an Indonesian aquarium exporter and was found to be genetically closest to an undescribed Floridian species (P. aff clavata) and another undescribed (and morphologically distinct) Japanese species (P. “sakajimaensis”), though it is unlikely to actually be either of these. It may ultimately prove to be the fabled Deady Seaweed of Hana (Palythoa toxica), or perhaps a species closely related to it. Nearly all of the verified reports of palytoxin poisoning stem from specimens that strongly resemble this poorly understood species, and the polyps in this study are no different.

And this really emphasizes the need we have for basic taxonomic research, an area of zoological study which has increasingly been overlooked and underfunded. When it comes to zoantharians, the only lab currently doing this type of work is that of Dr. James Reimer at the University of the Ryukyus. Palythoa has proven to be an especially difficult genus to elucidate, with relatively minor morphological differences separating the known species. Genetic data has been necessary to make any sense of the evolutionary relationships here, but we are quickly reaching the limits of what can be discerned with the tools currently being used.

What’s needed now is the collections of more specimens from as many locations and habitats as possible, and the sequencing of whole genomes to better determine their interrelationships. We might be sitting on the tip of the taxonomic iceberg when it comes to this group, but, until we can appreciate the full scope of their biodiversity, we will be fundamentally limited in searching out new palytoxins. If the cure for cancer is hiding in some innocuous brown polyp, we need to be able to find and identify that species accurately; however, doing so will require an immense effort on the part of researchers, and funding to match. But perhaps after centuries of neglect, Palythoa will finally get the attention it deserves.


Julian Sprung and the Power of Palythoa

Julian Sprung, Co-Founder of Two Little Fishies was kind enough to allow us to film his presentation at Reefapalooza 2015 Orlando. This is an incredible presentation on Palythoas and Palytoxin touching on science safety precautions recommended by Julian Sprung after his close encounter with a particularly potent Palythoa colony.