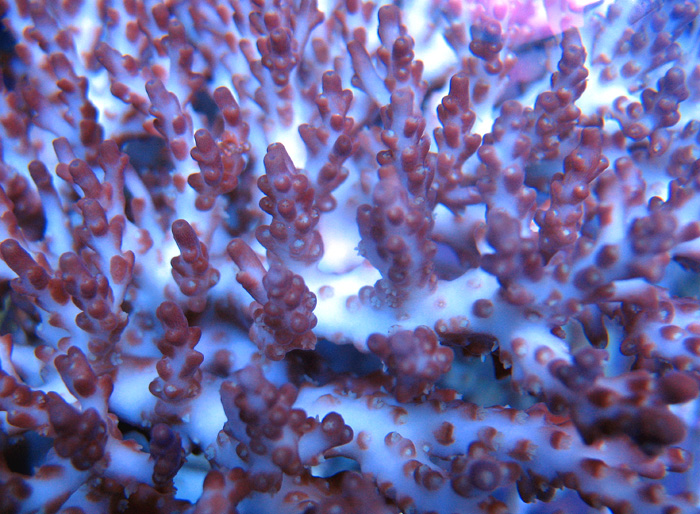 The Crayola Flower Table Acropora is one of the best colored Crayola corals that we have seen. There have been quite a few Crayola Acropora in the captive market going all the way back to the mid to early 2000’s. All those we remember however had dark brown to brown polyps. And these polyps extend during the day which can obscure the branch and corallite colors. This Crayola however struck our eye when we noticed the polyps had color. A bright solid white blue to cream blue. Branch stems are the typical colorful bright cream blue. Corallites are bright purple when most colored, but can be brownish if the coral is stressed from environmental factors.

Reeffarmers actually first saw this colony at Route 66 Marine in February 2015. The 10 inch wide tabling crayola colony had been in their facility for awhile. When we examined the colony closeup, we noticed that the polyps were pigmented. Typical Crayola corals have brown colored polyps that extend during the day. So this coral obviously had Limited Edition potential, but we had our hands full with other LE corals at the facility. We sent an image of the colony to one of our customers, Robert Williams in Pennsylvania, and he ended up acquiring the whole colony. Eventually Robert decided to send some fragments to Reeffarmers for LE evaluation.

Reeffarmers is maintaining a seed section of this coral in a 8 foot Raceway Gyre BiZonal system. This system is naturally filtered with a semi-cryptic zone and a reef flat exposed zone. In this captive reef the coral is positioned to receive moderate to weak light and moderate to weak water current. The first edition fragment of this coral was sold privately to Fay Simmons. Recommended list price on April 18th 2015 was $75 for a small fragment. 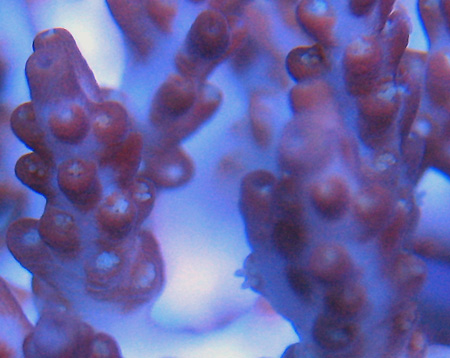