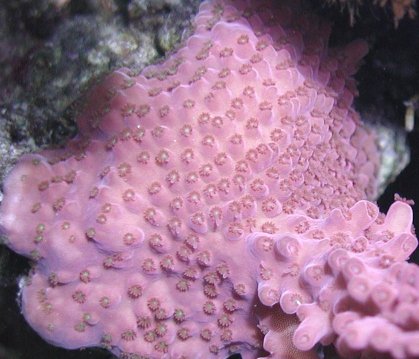 They were some very exotic Pink and Blue colored Acropora colonies occasionally imported from Fiji during the spring of 2003. These coral colonies had thick upright branches that were in plate-like arrangements. Unfortunately these corals did not ship very well. They had a tendency to die from shipping stress within the first few weeks in captivity. Their initial coloration was brilliant pink and blue hues. What typically happened was that a few branches were salvaged from the damaged colonies. These branches had a tendency to quickly lose their brilliant coloration and fade to brown. Photo and courtesy of Reeffarmers.