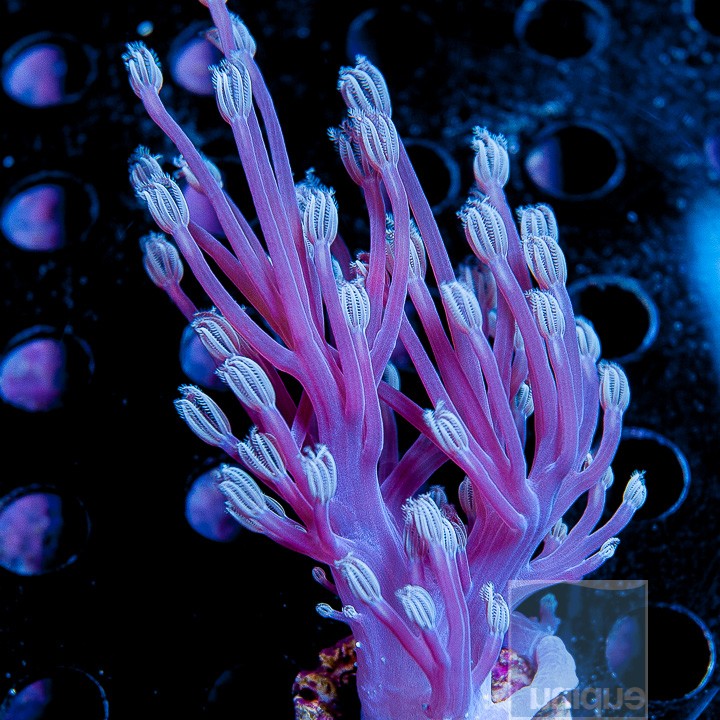 Cespitularia  sp. -ORA Vargas Cespitularia -3″ Stock Specimen- A beautiful non-pulsing relative of the popular Xenia, Cespitularia has beautiful color and flowing shape. This fast growing Cespitularia was brought to ORA by Tony Vargas, and has been growing in their greenhouse for several years. The stalks exhibit an iridescent indigo coloration, while the delicate polyps typically appear a light gold color. This is a hardy variety of Cespitularia, and it will thrive in a variety of aquarium conditions. The Vargas Cespitularia colony spreads across substrate by sending out a stolon and stalks remain interconnected by a thin strand of tissue, this “runner” appearance is unique when compared to the other Cespitularia varieties commonly kept in aquaria.

The Vargas Cespitularia was sent out for scientific identification as it was initially thought to be a member of the genus Efflatounaria. Michael Janes performed a comparative morphological analysis on three different Xeniids grown in ORA’s greenhouse, and found that all exhibited enough similar characteristics to classify them as the same species, Cespitularia erecta. While genetic testing would need to be performed for verification, the study opens the door for further understanding of how Xeniids grown in captive conditions.

NOTE: You will be purchasing a coral similar to the one in the photo. Because we spend less time photographing and uploading “stock” items, we pass the savings on to you! If they are on the site, they’re always ready to ship!