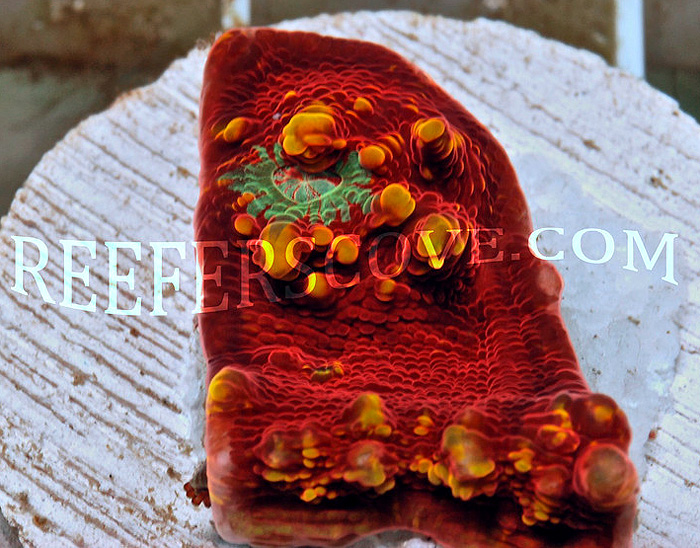 What a great name for a fiery colored chalice that has bright red surface pigments along with fiery orange (yellow/gold) ridges and protrusions. The Dragon Breath chalice can also develop a distinctly colored growing edge or outer rim. That edge is typically colored green/yellow and chalices with colored edges are considered rare and unique. Within the corallites eyes there are patches of bright blue turquoise that can contain outward radiated rays or bands of color. A dark band of red pigmentation can also develop inside the outer growth edge. Reef Farmers acquired our Dragon Breath Chalice directly from Reefer’s Cove in the fall of 2012. The coral was originally discovered and acquired in June 2012 by Jorge at Reefer’s Cove. He has been maintaining this coral under T5 lighting and recommends moderate chalice light levels. Water current recommendations are low to moderate. Reefer’s Cove states this spectacular chalice will fragment and grow very well in captivity. It appears to have completed the transition to captivity very well. Photo courtesy of Reef Farmers.