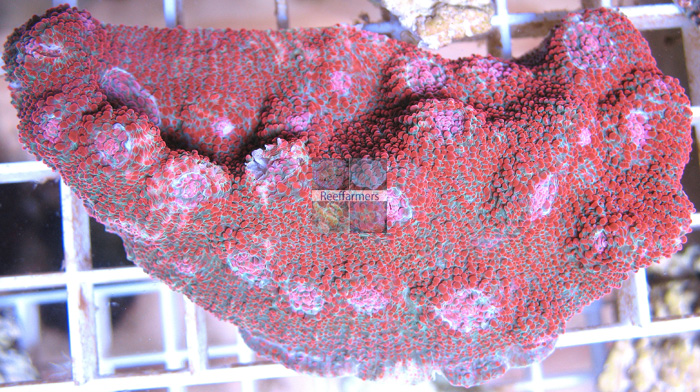 The Volcano Chalice is one of the early Old School Chalices. This coral was imported prior to the discovery of the first Watermelon Chalice. This was when Fragfarmers Old Shop in Upland was a major importer of whole chalice colonies. There was very little interest in those corals at the time. The Volcano Chalice has very exotic pigment patterns over its surface. Its has a psychedelic pattern of short red stripes with a greenish hue located between the red stripes. These pigments can fade under strong light levels. The corallites also contain exotic pigment patterns. The center has pink spot patterns. These patterns are ringed by a line of bright turquoise blue pigmentation. So each large corallite has a basic volcanic crater appearance. Corallites are fairly large in diameter.