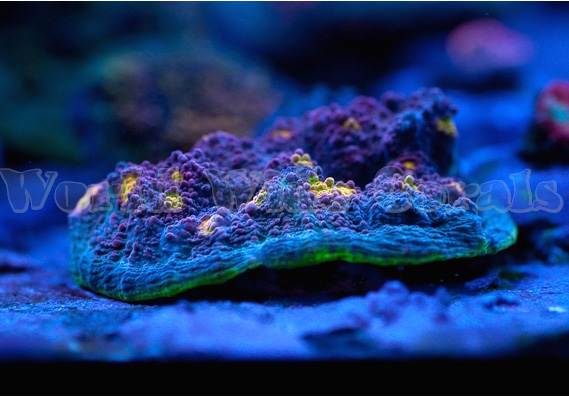 The very unique and colorful Blue Blazing Watermelon Chalice is another incredible Echinophyllia chalice coral from World Wide Corals in Orlando. Victor and Lou have acquired an absolutely amazing collection of corals. They initially discovered this coral during a week long coral hunting trip through the wholesale and retail coral sellers of Southern California. Initially the coral was not colored very brightly. There was a faint trace of the surface pink pigments along with a slightly blue base. The corallite eyes were just faintly yellow. This is a common occurrence when corals are shipped in from the wild. Their colors can diminish during the stress of collection and transport. Some natural reef locations can also be just marginal for quite a few corals due to pollution and climate variance. Within just a few weeks after placing the coral into one their main show tanks, the superb environmental conditions promoted some incredible pigment intensity. The coral has four distinct colors. A blue base with the traditional pink pigments located in the upper area of surface bumps or protrusions. The corallite eyes contain some of the brightest yellow centers of any chalice coral. This coral has also developed a unique double colored growth rim. The traditional outer edge of bright green has an inner ring of blue pigments.