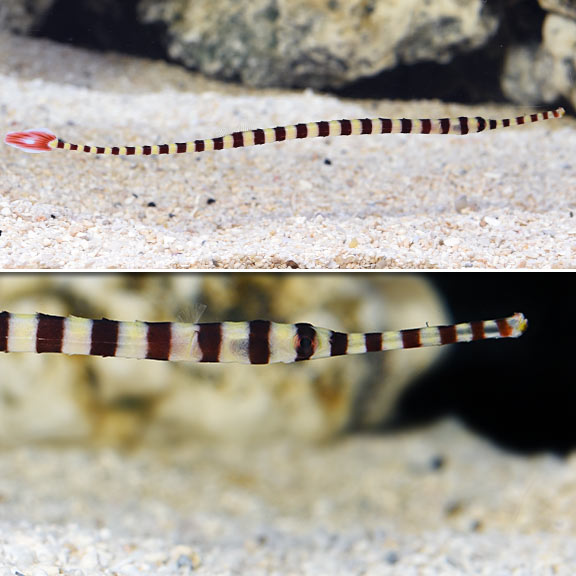 The Banded Pipefish is a type of reef pipefish or flagtail pipefish. This fish is a stronger swimmer than its seahorse cousins and rarely comes into direct contact with the substrate. In the wild, the Banded Pipefish can be found swimming under rocky overhangs, corals, or close to the floor of its reef habitat.

The Banded Pipefish has a long, slender body with a tiny, tubular mouth and an oval, flag-like tail. The body is creamy white with dark red to black vertical rings from the snout to the tail. The tail is bright red with a white margin and dot in the center.

Due to the Banded Pipefish’s eating habits we suggest expert’s only purchase these fish. It normally prefers to eat only live copepods in a mature reef aquarium with plenty of live rock or macroalgae. An ideal diet to start this fish on is Live Copepods and vitamin-enriched live baby brine shrimp. However, live baby brine should not make up the majority of its diet.