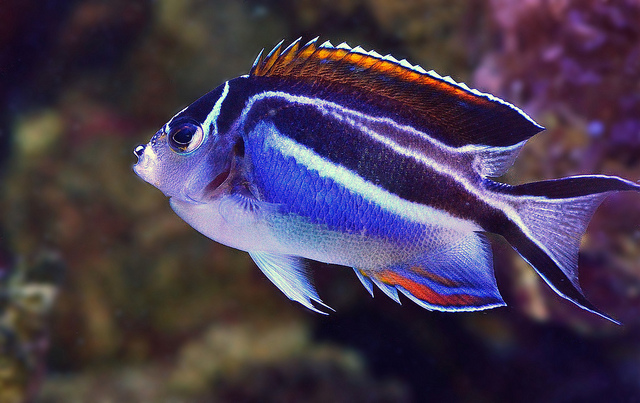 The Bellus Angelfish is one of the few angelfish displaying sexual dimorphism. The male is an iridescent pale white and blue, with the lower half of the body and anal fin highlighted by long, horizontal blue stripes and one, yellow to orange stripe extending toward the caudal fin and edging the dorsal fin. The female is an iridescent pale white and blue and black with a yellow/orange dorsal fin and lateral stripe running from gills to tail.
Bellus Angelfish are best housed as a male-female pair or small harem of one male and few females in a 125-gallon or larger aquarium, and are ideal candidates for the deep-water reef aquarium. Acclimation will be facilitated by a dimly-lit tank, but these fishes seem to adapt well to the intense lighting in most modern reef aquariums. The tank should have multiple hiding places and live rock for grazing. Do not keep two males in the same tank as fighting will ensue.

The Bellus Angelfish are hermaphroditic and have the ability to change sex from female to male, and males can even revert back to female if no females are present in the aquarium. They are difficult to breed, but many seasoned veteran aquarists have successfully observed these fishes spawning on a regular basis in very large home aquariums.