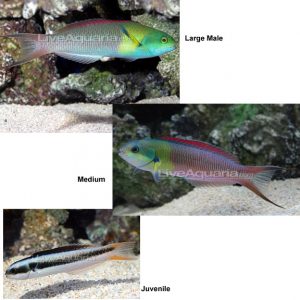 The Blunthead Wrasse should be housed in a 75 gallon or larger aquarium with plenty of live rock for hiding and a sandy substrate that may be used for burrowing into at night. In addition to ample hiding places, a large open area is required for the active and fast-swimming Blunthead Wrasse. In large aquariums, several initial phase and juvenile Blunthead Wrasse may be housed together in relative peace. However, as adults, the Blunthead Wrasse demonstrates greater aggression and is best kept singularly in a FOWLR (Fish Only With Live Rock) aquarium with gregarious tankmates.