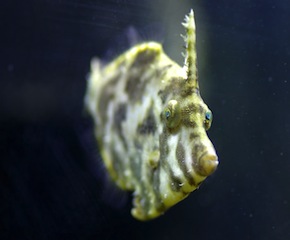 This fish has become popular because of its appetite for Aptaisia and other small pest anemones. It’s a hardy fish but has mixed reviews on its ability to live in a reef tank without nipping on corals and some other reef inhabitants, like small clams. I’ve kept several of these fish and my experience has been that if they are kept well fed, corals or other reef inhabitants are usually safe with the exception of shrimp. However, many aquarists have reported nipping of corals such as zoanthids, acans and duncans, to name a few. Small clams have also been reported as a potential target by the filefish. The good news is the fish is pretty easy to capture should it need to be removed. The male has bristles” located towards the end of the tail. These fish have been bred and raised successfully in captivity.”””