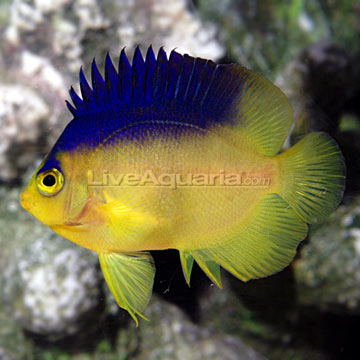 The Colin’s Angelfish originates from Indonesia in the Western Pacific as well as Fiji in the South Pacific. This deepwater fish is a beautiful yellow with a distinctive blue back and dorsal fin. They are a rare find in the industry, and will make a wonderful addition to the experienced marine fish collector’s display.

The Colin’s Angelfish requires a 70-gallon or larger aquarium with hiding places and large amounts of live rock to graze on the microalgae growth. These fishes prefer a dimly lit aquarium, but seem to adapt well to brighter lighting system utilized on modern reef aquariums. Use caution when maintaining this species in an SPS aquarium that is dominated with frags as opposed to larger colonies, as they may nip at SPS corals which can cause damage to smaller frags. Ideally this should be the only dwarf angelfish in the display and its best to add the fish prior to the introduction of larger and more active fishes, as they can be a bit more reclusive and shy initially.

The diet of the Colin’s Angelfish should include Spirulina, marine algae, high-quality angelfish preparations, mysis or frozen shrimp, and other meaty items.