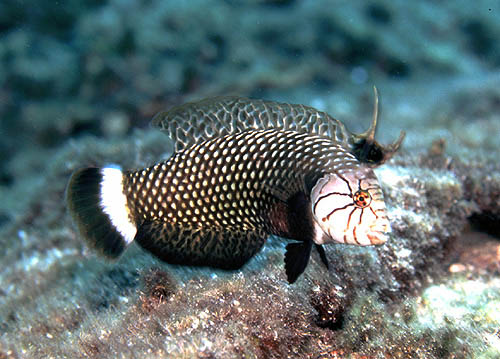 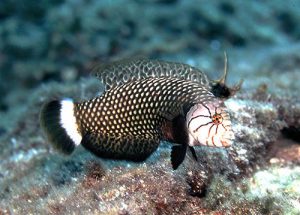 The Dragon Wrasse is also referred to as the Rockmover Wrasse. The juvenile body coloration can range from maroon to green with white markings. The fins are also notable in their appearance, especially the first two dorsal spines that form a “cow-lick.” The adult does not have the large dorsal spines and has a light-blue to green body with impressive darker markings.

It should reside in a 180 gallon or larger aquarium with a 2-4 inch sandy bottom in which it can submerge itself since it sleeps in the sand. It may be kept with fish that are aggressive or larger than it is, but should be housed with more passive fish as a juvenile, house only one per tank. It should not be placed in a reef aquarium. As the Dragon Wrasse matures it will eat crustaceans, snails, shrimp, starfish, smaller fish, worms, and other invertebrates. It also moves the corals and rearranges the rocks in the aquarium to find food. The aquarium should also have a tight-fitting lid to prevent it from jumping out.