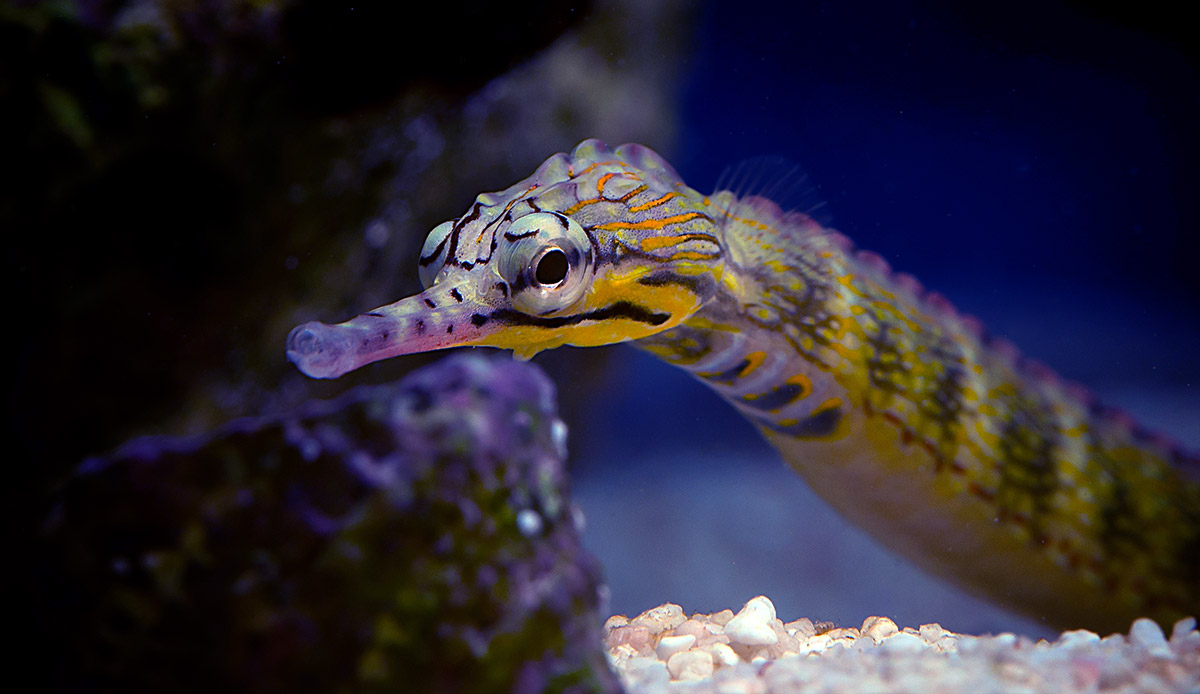 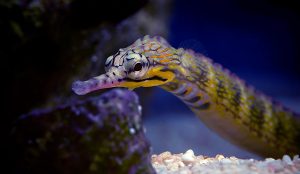 The Dragonface Pipefish is also called the Reeftop Pipefish, Messmate Pipefish, Network Pipefish, and Banded Messmate Pipefish. This fish has a long, slender body with a tiny, tubular mouth and a small pink tail. The body is cream colored with highly variable black, pink, and yellow markings. Each individual has a unique pattern, and some can be very striking and colorful. The South Pacific or Tongan Dragonface Pipefish has been scientifically identified as Corythoichthys haematopterus, and the Western Pacific or Indonesian fish as Corythoichthys intestinalis. Although there are slight differences in markings, these fish look very similar and are oftentimes hard to distinguish from one another. To complicate matters further, some ichthyologists suggest there are over 12 sub-species due to regional variation among these fishes.
The Dragonface Pipefish is a poor swimmer and prefers to travel by sliding its body over substrate and live rock similar to the way a snake moves. The Dragonface Pipefish can also use its tail to loosely anchor itself to corals or rocks.

The Dragonface Pipefish is among the hardiest pipefish, but we still suggest expert only aquarist due to its unusual feeding requirements. It normally prefers to eat only live copepods in a mature reef aquarium with plenty of live rock or macroalgae. An ideal diet to start this fish on is Nutramar Tigrio Bottled Live Copepods, and vitamin-enriched live baby brine shrimp. However, live baby brine should not make up the majority of its diet. Over time, the Dragonface Pipefish may become accustomed to eating frozen Cyclops, small Mysis, and Nutramar Ova.

Looking for the best food to feed your Pipefish? We recommend AlgaGen Tisbe biminiensis.

After an elaborate courtship dance, the female will attach her adhesive eggs to the smooth area on the underside of the male’s trunk. A pair will regularly mate in an aquarium if well-fed. Mature males have a smooth, flat brood patch on their underside with small skin flaps on both sides.

This social species is best kept in mated pairs or groups of its own kind in an aquarium that is 50 gallons or larger. It may be kept with small, shy fish such as small gobies, seahorses, dragonets, and firefish. Aggressive, territorial, or fast-moving fish do not make good companions. The Dragonface Pipefish is slightly more tolerant of corals and larger fish, but can be harmed by anemones and corals with strong stinging tentacles or corals that are large enough to consume it, such as brain corals. The Dragonface Pipefish can also be harmed by invertebrates such as crabs, large shrimp, and large clams, but will not harm ornamental shrimp or invertebrates.

This species of pipefish has been found to consume the dreaded micro-amphipod commonly referred to as “Red Bugs” that have now become prevalent in reef aquariums that contain Acropora coral. Red Bug infestations on Acropora corals have been shown to inhibit polyp extension and growth, while causing shifts or loss in coloration. After the pipefish is accustomed to the surroundings and tankmates in the reef aquarium, it will quickly seek out these red bugs as a food source. (Live Aquaria)