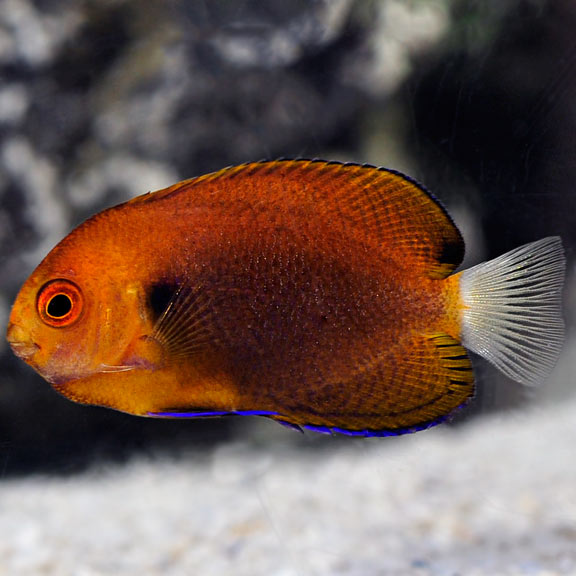 The Fisher’s Angelfish is also referred to as the Fisher’s Pygmy or Fisher’s Dwarf Angelfish, Orange Angelfish or Yellowtail Angelfish. It is only found in the Hawaiian Islands and along the Johnston Atoll. Fisher’s Angelfish is predominantly orange with a thin sapphire-blue outline highlighting the belly and anal fin; the caudal fin is pale yellow.
A minimum of a 55 gallon tank with lots of hiding places and live rock for grazing will offer an environment in which to thrive. It should be the only dwarf angel in the tank. Not a good reef dweller, like most angels the Fisher’s Angelfish will nip at stony and soft corals (sessile invertebrates) and clam mantles. It will also graze on diatoms on the tank surface.

It is hermaphroditic, very difficult to breed in an aquarium, and has no distinguishable differences in color between male to female.

The diet of the Fisher’s Angelfish should include Spirulina, marine algae, high-quality angelfish preparations, mysis or frozen shrimp, and other meaty items.