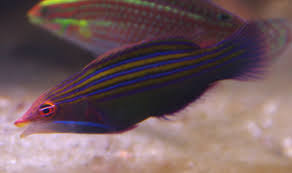 The Four Line Wrasse is an active swimmer with a spectrum of beautiful colors. This very ornate wrasse sports four bright blue horizontal lines overlaid against a green body with yellow to orange color between the bright blue stripes. This member of the Labridae family brings an interesting mix of colors to any marine reef aquarium. Another alluring trait of this gorgeous little wrasse is its red eyes with continuing whiteish blue stripe that runs through and connects to the body stripes. When courting, a male Four Line Wrasse displays coloration of even greater intensity.

Also known as the Fourstripe Wrasse, Pseudocheilinus tetrataenia is native to the reefs of the Western-Central Pacific where it actively forages amongst corals and rocks for food. As such, you can expect to observe this reef dweller patrolling the lower regions of your aquarium darting and foraging for food amongst the rockwork, around the base of your corals, as well as near the substrate.

In the home aquarium, the Four Line Wrasse requires a peaceful, established environment with a generous supply of hiding places and live rock in which it can take refuge and forage for food. Here, the Four Line Wrasse will search for live foods in the form of microfauna, small crustaceans and pyramidellid snails (clam parasites), and commensal flatworms. The Four Line Wrasse is also known to feed on smaller unwanted pests on live rock such as bristleworms.