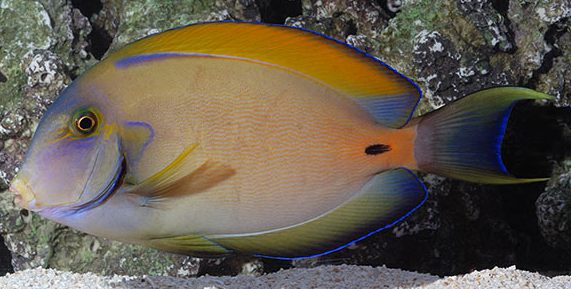 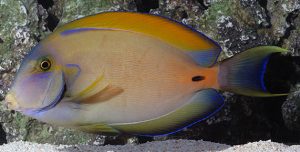 The Fowleri Tang, also known as the Blackspine Surgeonfish, is one of the more beautiful tropical Tangs. A blue head with characteristic arcing lines behind the eye sets this species apart from other tangs. A brown body, yellow dorsal fin, and white lyre accent on the tail also make this specimen a true standout.

In its natural habitat, the Fowleri Tang is generally found in clear seaward reefs and drop-offs. A 360 gallon or larger established aquarium with large amounts of live rock is necessary to provide both plenty of swimming room and territories within the live rock.

Although tangs will eat meaty foods along with the other fish in the aquarium, it is important that they are offered plenty of marine based seaweed and algae. This will strengthen their immune system, reduce aggression and improve their overall health. Offer dried seaweed tied to a rock or use a veggie clip, and feed at least 3 times per week. These are great fish for controlling algae in the saltwater fish or reef aquarium.