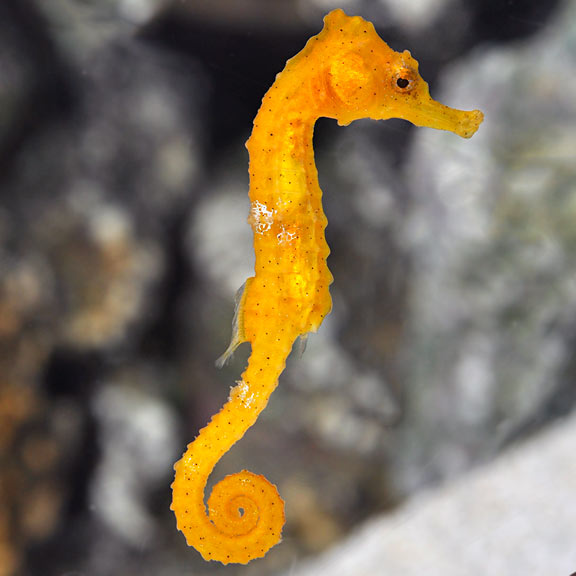 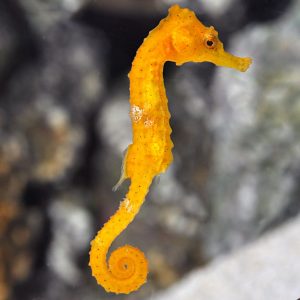 The Ingen’s Seahorse, Hippocampus ingens, is one of the largest of the seahorse species. In the wild they spend most of their time hunting for tiny crustaceans to consume while using slow movements and camouflage to mimic their surroundings and appear invisible to predators. The Ingen’s Seahorse can be reddish to maroon, gray, yellow and gold with various shades of brown they may also have fine white markings which may run vertically down their body.

These social fish thrive when kept as a mated pair or in small groups in a species-only aquarium. A 30 gallon aquarium is sufficient for a single pair. Add 20 gallons to the size of the aquarium for each additional pair. Spray bars may be used to create gentle flow while eliminating stagnant areas in the aquarium. Seahorses are not strong swimmers, preferring to use their prehensile tails to hitch to branching live rock, algae, or artificial decorations. Seahorses are less likely to contract Vibrio bacterial infections if the temperature is not allowed to exceed 74°F. This is particularly important if the aquarium contains other species of Syngnathids. It is also necessary to remove detritus and uneaten food daily. Calcium and alkalinity levels must be monitored and maintained to keep their bony plates healthy.

They may be kept with small, shy fish such as small gobies, pipefish, dragonets, and firefish. But aggressive, territorial, or fast-moving fish do not make good companions. Seahorses will be harmed by anemones and corals with stinging tentacles or corals that are large enough to consume them, such as brain corals. While sea fans, Acropora corals, and other branching corals may be safe for seahorses, they can be irritated or damaged by a seahorse that continually hitches to them. Crabs and clams may pinch a seahorse causing a wound that could lead to secondary infections. Small ornamental crustaceans may be consumed by the seahorses.

Avoid fish that will out-compete the seahorse for food. These captive-bred seahorses are accustomed to frozen Mysis shrimp, making them a smart alternative to their wild-caught counterparts. They will also feed upon amphipods and other small crustaceans found in live rock. They will also accept vitamin-enriched adult brine shrimp, but this should not make up a majority of their diet. They are slow, deliberate feeders and prefer two or more small feedings per day.