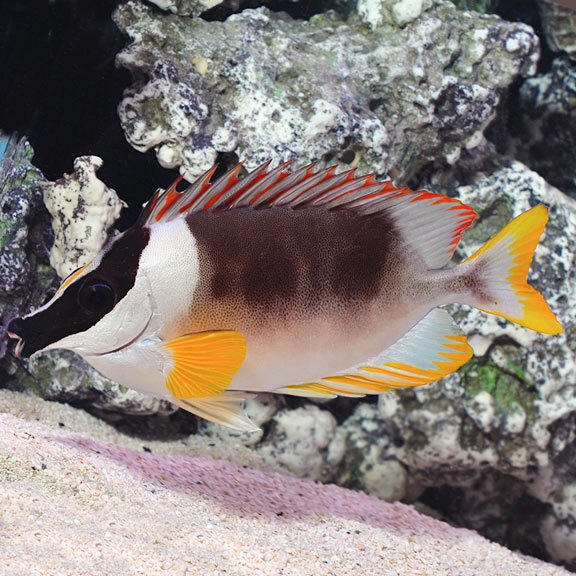 The Magnificent Foxface, also known as the Magnificent Rabbitfish, Andaman Foxface, or the Red Fin Foxface, is a uniquely colored fish. The face is white with a distinctive black band. The body is half white and half dark brown to black and each fin is fringed with yellow or red. It is a very hardy fish, and is a great addition to the newly-established tank.

It may reside in a 125 gallon or larger aquarium. It is a very peaceful species except when housed with other rabbitfish. The Magnificent Foxface may be housed with more aggressive fish. Its predators will tend to leave it alone because of its venomous dorsal spines. Rabbitfish are generally reef-safe if they are well fed. If not, it is possible for them to nip at and consume some species of LPS and soft corals.

The Magnificent Foxface diet consists of a variety of fresh vegetables and undesirable species of algae. It does nip and possibly eat some soft and hard coral polyps.