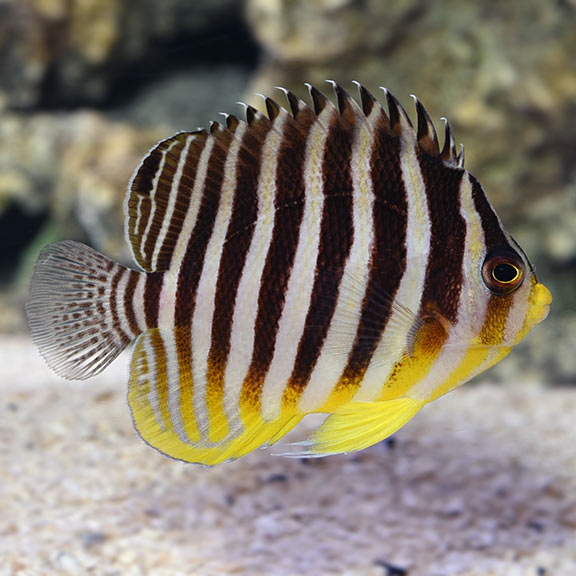 The Multibar Angel, also known as the Many Banded Angelfish and Multibarred Angelfish, has individual black and yellow vertical bands arranged in an “every other” fashion, with a thin stripe of white bordering each black band. The tail is white to yellow with small black speckles. A juvenile can be distinguished by a blue eyespot at the back of the dorsal fin.

The Multibar Angel requires a minimum tank size of 70 gallons with plenty of hiding places and live rock for grazing. This angelfish is best kept as the only species member in a tank. The Multibar Angel, like other dwarf angels, are hermaphroditic, difficult to breed, and indistinguishable in color variations from male to female.

The Multibar Angel can be a finicky eater; it prefers a variety of small meaty items, angelfish and herbivore preparations, and live sponges. These eating habits and the trait of becoming somewhat territorial upon acclimatization, make this a challenging fish to keep.