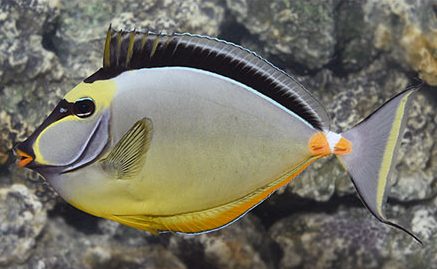 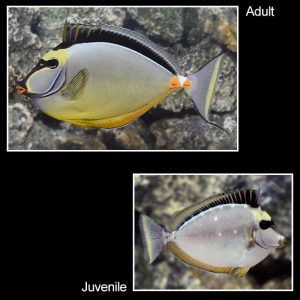 The Naso Tang, also known as the Orangespine Unicornfish, darkens with maturity. Naso Tangs from Hawaii are often more brightly colored than those found in other areas. As a juvenile, the Naso Tang from Hawaii is dark gray with a blue stripe following along the dorsal fin and an orange stripe in the anal fin. When matured, the body takes on a reddish-brown tone and the juvenile striping is supplemented with additional color. The tail takes on a lyre shape with a yellow vertical bar towards the back. Two orange patches appear at the peduncle spines near the tail. The face undergoes the largest change. A thin, black mask forms between the eyes and mouth. The mask is outlined with bright yellow and the lips develop a reddish-orange color.

A 180 gallon or larger aquarium is necessary to provide plenty of swimming room, and places to hide, with a tight-fitting lid provided to prevent jumping to escape. It is aggressive towards other tangs, but peaceful with other fish in the tank.