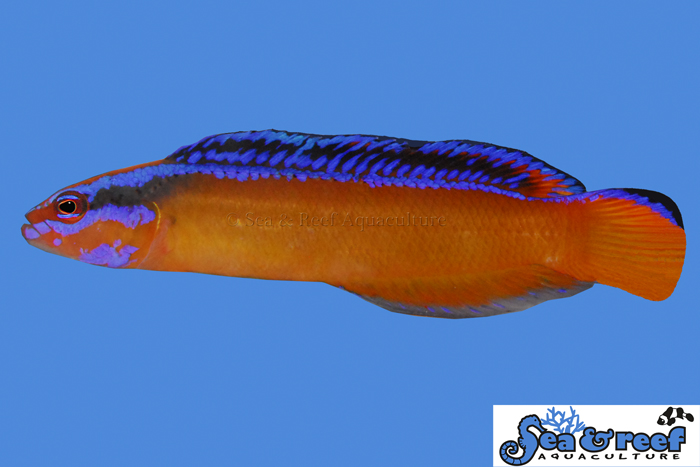 The Neon Dottyback is absolutely stunning. It has a bright orange body color with electric blue lines on the head and on the top part of its body and dorsal fin. This species tend to be bolder than most dottybacks and will spend more time out in the open. The Neon Dottyback is also known for having a healthy appetite for bristle worms that sometimes can be a nuisance in saltwater aquariums. Limited collection from the areas of origin has made it increasingly hard to come by wild collected Neon Dottybacks. Fortunately, we have included this species in our breeding program and captive bred Neon Dottybacks are readily available from Sea & Reef Aquaculture. Neon Dottybacks are native to the Persian Gulf and the Gulf of Oman. It is found north to Kuwait, south to the Arabian Sea, West to Gulf of Aden and east to the Seychelles (Aldabra Islands). The Neon Dottyback can be aggressive to smaller fish and we recommend you keep this fish with larger fish species. If you want to house this beauty in a smaller community tank, make sure to add it as the last fish. Captive bred Neon Dottybacks tend to be much less aggressive than wild collected fish. Most dottybacks love meaty food items like Mysis shrimp, brine shrimp, krill, and various frozen meaty aquarium foods. However, they will also readily accept pellets and flake food. Neon Dottybacks have a reputation for feasting on bristle worms in your tank if they are present. It is not uncommon to see white bristle worm spines protrude from their faces. This does not seem to bother them and the spines will quickly disappear. Photo and text courtesy of Sea & Reef.