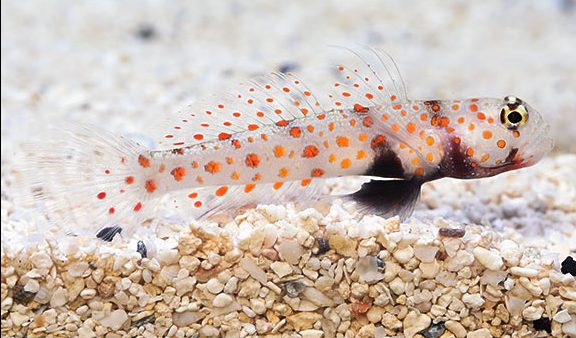 The Orange Spotted Goby, also known as the Spotted Prawn Goby or Orange Spotted Shrimp Goby, was first discovered in the Western Pacific in 1938. Its body is white with orange spots outlined in brown. It has the ability to form symbiotic partnerships with nearly blind alpheid shrimp. It provides a watchful eye while the shrimp digs a burrow for them to share.

It is best suited for aquariums that are 10 gallons or larger which have adequate hiding places along with ample swimming space. The aquarium should have a tight-fitting lid to prevent it from jumping out. The Orange Spotted Goby adapts well to reef aquariums, although it does pose a possible threat to small, delicate ornamental shrimp. It prefers a bed of fine sand and loose coral rubble to sift through.

It is possible for the Orange Spotted Goby to spawn successfully in an aquarium.

Its diet should consist of a variety of fresh or frozen mysis shrimp, vitamin-enriched brine shrimp, and table shrimp. It should be fed at least twice per day.