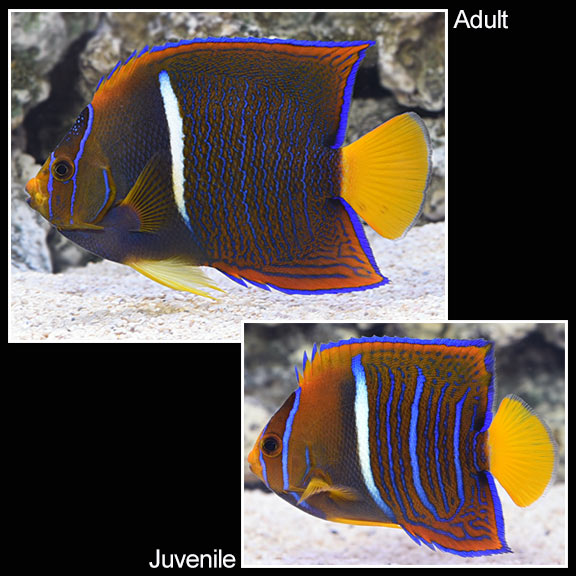 The Passer Angelfish is also called the King Angelfish. The adult is predominately dark blue with a white vertical stripe extending down from the dorsal fin about two-thirds of the way to the pelvic fin. The dorsal fin is rimmed in yellow. The caudal and pectoral fins are also yellow, while the ventral fins are yellow on a female, and white on the male. The juvenile is orange with one white and multiple blue stripes.
The Passer Angelfish can grow to over a foot in length so it requires at least a 250 gallon aquarium. It is a hardy fish, but can become aggressive, so it should be kept with other semi-aggressive tank mates. It grazes on live rock and will nip at stony and soft corals (sessile invertebrates) and clam mantles, so it is not a good candidate for a reef aquarium.

The diet of the Passer Angelfish should include vegetable matter such as Spirulina, marine algae, meaty items, and high-quality angelfish preparations which include sponges. Feed at least three times daily.