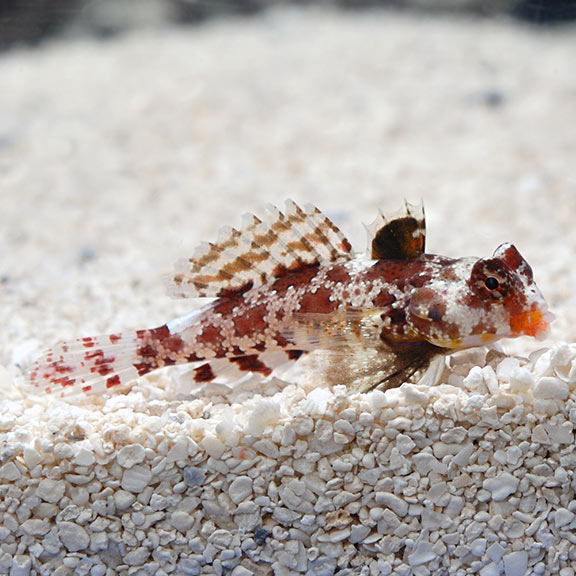 This fish’s body is a mottling of red and white with large dark spots or patches. The male usually has brighter colors and a larger dorsal fin.

It prefers an established reef aquarium of 30 gallons or larger with lots of live rock to hide in and graze from. The substrate should be live sand and the aquarium should have docile inhabitants. More than one of its species may be kept, and it is best to introduce them all to the tank at the same time. The ratio should be 2 or 3 females per male. A 55 gallon or larger aquarium is required if more than one male is to be kept. Red Scooter Dragonets are one of the few smaller marine fish that can be sexed. Males will have an extended dorsal ray, or mast, on their dorsal fin which also displays distinct stripes and ocelli, or eyespots. Female Dragonets will have a shorter, rounded dorsal fin. Only keep one male per aquarium since two males will likely fight until death.

The Red Scooter Dragonet diet should consist of brine shrimp, bloodworms and small invertebrates. They are slow-moving, deliberate feeders and should not have to compete for their food.