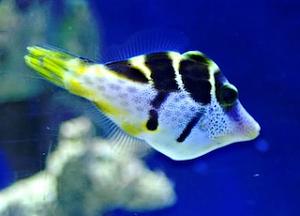 The Mimic Filefish (Paraluteres prionurus) is the perfect alternative to the Valentini Puffer (Canthigaster valentini) for a reef tank. The Mimic Filefish is reef safe with a bit of caution. They grow to about 4 inches. As you can see, the resemblance is almost identical to the Valentini Puffer. The Mimic Filefish has a second dorsal fin versus the Valentini Puffer, which only has one. Assuming you receive a healthy specimen, this fish is pretty hardy. It’s difficult to get them eating pellets and/or flakes but they will aggressively eat meaty foods such as frozen mysis shrimp. This fish is not commonly available in the trade but not too expensive when it does turn up. Sex can be determined by looking closely at the tail region. You will see spikes” near the base of the tail of males. These spikes are absent in females.”””