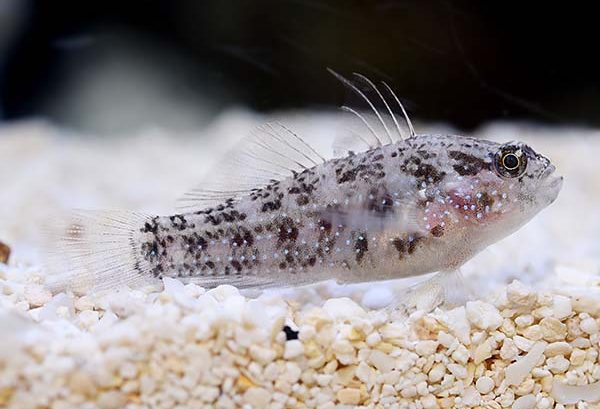 The Starry Goby is a small, hardy, and ornate goby that is not often available in the hobby despite its wide natural distribution. In the wild, the Starry Goby is distributed across the Indo-Pacific Ocean from the Persian Gulf and Red Sea to the Hawaiian Islands, north to southern Japan, and south to northern Australia where it typically inhabits sandy, rubble zones in shallow protected bays, coral reefs, lagoons and tidal estuaries. The Starry Goby boasts a beautiful, star-spangled appearance with bright iridescent blue spots that adorn a dusky, mottled body color.

The ideal setup for the Starry Goby should be a mature 10 gallon or larger aquarium with an established population of copepods aquascaped liberally with live rock, live sand, and plenty of hiding places. The Starry Goby is a peaceful and shy fish that rarely demonstrates aggression towards other fish except, perhaps on occasion, those of its own genus. Multiple individuals can be kept in larger aquarium setups but be sure to house the Starry Goby with fish of peaceful temperament and avoid keeping with more aggressive fish. Similar to many gobies, the Starry Goby will tend to spend most of its time keeping busy in and around a burrow or hole it favors.

The diet of the Starry Goby should consist of a variety of meaty foods and vegetable matter including mysis shrimp, other frozen meaty foods soaked in a vitamin supplement, phyto- and zooplankton foods, and flake foods. To best recreate natural feeding conditions, place the food in the outflow of a water pump or wavemaker so it actively disperses into the water column. The Starry Goby should be fed multiple small meals throughout the day.