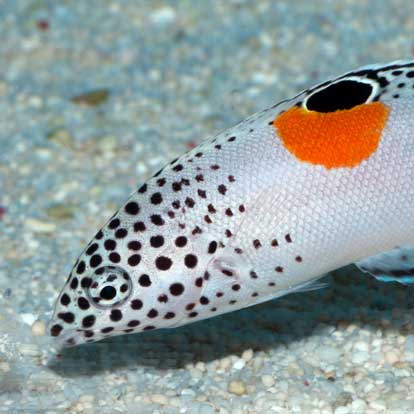 The small, attractive juvenile form of the Twinspot Wrasse is most often seen in the aquarium trade, but don’t be fooled – this fish will turn from white with orange eyespots and black dots to a dark green monster when it matures. They typically reach about two feet long in captivity, but fishbase reports the largest specimens measured to be nearly four feet in length. Newly acquired juveniles are timid and shy, requiring a deep sand bed for burrowing. They tend to be fragile when very small. Use caution when introducing new fish to an older twinspot wrasse. They will consume most invertebrates like crabs, shrimp, and marine worms. Adult twin spot wrasse are not recommended for reef aquariums because their foraging activities can harm corals.