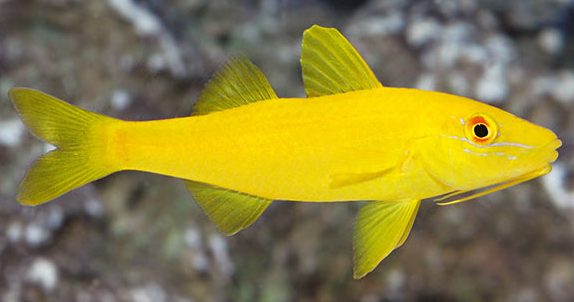 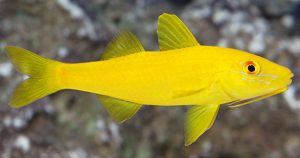 The Yellow Goatfish is also referred to as the Yellowsaddle Goatfish, or Goldsaddle Goatfish. It is a solid golden-yellow color from head to tail. Goatfish are relatively new to the hobby, but fast growing in popularity. If you’re looking for the unexpected, consider the Yellow Goatfish. These hardy characters introduce energetic activity to the aquarium bottom as they actively patrol the sand bed to satisfy their appetites, making them a unique addition to your aquarium.

An established 180 gallon or larger aquarium with large areas to swim, and rockwork with a few hiding places is recommended. The young Yellow Goatfish may sift the sandy bottom of the aquarium in search of invertebrates to eat so a moderate substrate layer is a must. The older Yellow Goatfish may pick at small crustaceans, fish, and worms. Goatfish prefer to be housed with less aggressive tank mates.

The diet should consist of a variety of meaty items. Goatfish have a high metabolism and should be fed four to five times daily.