Hi I'm asking for a freind of mine his tank is almost 2 years old and from what he says pretty much stable , he recently has been running way to much gfo and has had a nasty outbreak of dinos , it looks like reddish brown sludge with bubbles any advice would be appreciated thanks

have to out compete the fast growing dino with another species of algae, going to be tough. I went though dinoflaggelates in the fall, and replaced it with hair algae, of which I have lots of now. heh. Hair algae out competed the dino, and I think is easier to control, though normal methods. Personally using an algae scrubber now, and starting chaetomopha cultures now. if he can get macro algae culture going, without dino contamination, I think it would work also.

What is the photo period for the tank? Perhaps decrease the number of hours and also try turning off the lights for 3 days or so.
N

sounds like your friend depleted his phosphates to 0 which would allow dinos to outbreak since the bacteria were thrown out of the redfield ratio for uptaking nutrients, i can't really recommend a treatment method specifically since to do that it will take a microscope with atleast 100x zoom to identify what strain of the 2400 strains that exist you are actually taking about. so in the meantime i suggest that he adds phosphates back to the tank, either by using sodium phosphate (preferred) or potassium phosphate (freshwater fertilizer phosphate) to get a reading of atleast .1 with nitrates preferably above 10.

now alot of people say their success lies with dosing h2o2 but id advise against that early on, for one simple reason, its bacteria that outcompete dinos in the long run, not microalgaes or macroalgaes. while they can outcompete dinos for available nutrients, its the stabilization of the bacterial colonies that help tanks stabilize in the long run. one method that works really well is the elegant corals regimine for dinoflagellates. i will link it here https://www.google.com/url?sa=i&url=https://elegantcorals.com/blog/&psig=AOvVaw0bkarIesWUk1qgYSD4Sfvx&ust=1582425104522000&source=images&cd=vfe&ved=0CAIQjRxqFwoTCODXz4OP5OcCFQAAAAAdAAAAABAI

if you go this route you MUST follow every direction absolutely, or the treatment will fail and possibly crash your tank if you misuse any of the dosing materials. however this has worked for me in my personal experience within 7 days all dinos are either severely cut back or diminished altogether.

others use UV sterilization, but again, unless you know you have a free swimming version of dino all youd be doing is killing bacteria/algae that would otherwise compete against the dinos.

it is very important that while you may rid the dinos, you should be checking alk and nutrients specifically to make sure you stay above 7 alk and above 0 nitrate/phos for the weeks following, as any alk lower than 7 and depletion of nutrients will just lead to the problem starting all over again, dinos are always in every system, even zooxenthallae is technically a dinoflagellate, so the goal is to keep parameters stable not necessarily kill dinos.

all the best of luck to your friend

About 2 years ago I had a pretty bad outbreak of dinos which was undoubtedly brought on by a lack of maintenance.

Some family issues took precedence and my routine of water changes and maintenance went by the wayside. Weeks and sometimes months went in between my otherwise biweekly water change schedule. Additionally, red cyanobacteria crept up and only added to the disgusting mess that had become a once good looking reef.

After reading a lot of horror stories about how its a long road and pretty much unbeatable, I just figured I'll start up on my maintenance again.

I initially did a treatment or 2 of red slime remover back to back...and to my surprise it kinda worked. Didnt totally eradicate it, but it knocked it back alot. From there I changed my filter floss daily and did a 20% water change like every 5 or 6 days, eventually pushing it back to 10 days.

It took a while, like a few months a while, but it cleared up. Was it a coincidence or just good luck...I dont know. Alot of people have different approaches to eradicating dinos and I'm sure they all have some validity to them. Do some research on them, pick one and go with it. Just dont expect a rapid fix.

A little side note...about 7 years ago I was battling dinos in my first reef tank. New to the hobby and not the most knowledgeable in things, I took to youtube to remedy dino problem. After finding a video from a aquarium shop in the UK that treated dinos with hydrogen peroxide, I decided to give it a shot. Well after my first dose of the food grade hydrogen peroxide that was concentrated at 30%..my fish instantly went belly up. To the surprise of many...which was vocalized by the comments posted on the YouTube video, the hydrogen peroxide was supposed to be diluted down to 3%. Apparently I wasnt alone in losing my fish..and very a many people were calling for this person's head. The poster immediately revised his video, stating he forgot to mention that it needed to be diluted.

Point is...do your homework on any course of action you take before diving in.

Hi guys I blacked the tank out and ran a uv sterilizer I'm very happy cause the dinos are gone , thank you all very much for taking the time to help 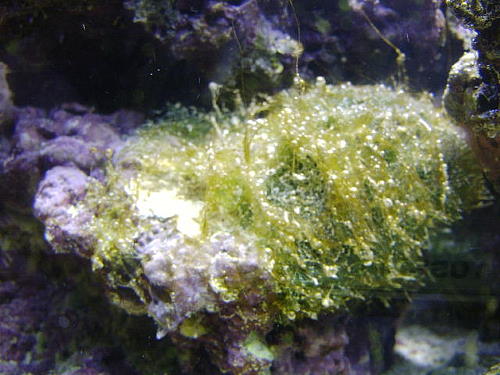