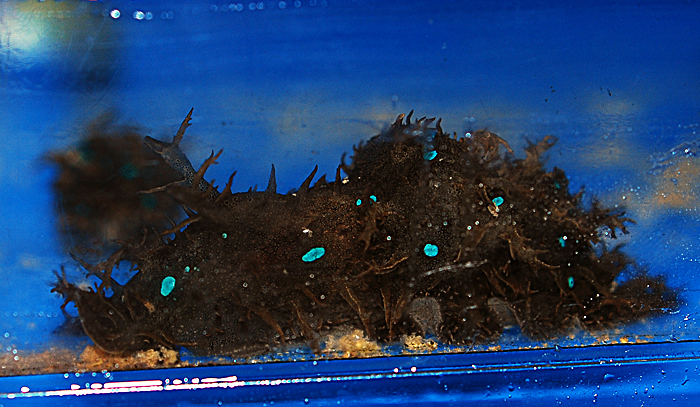 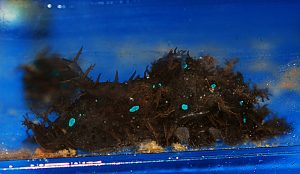 The Blue Spot Sea Hare is a beautiful, frilly sea hare with a brown, tan, or black coloration with metallic blue spots. It is smaller than other species of sea hares common in the aquarium trade. It seems to be less likely to emit toxic ink than its larger cousins when handled or upon death (personal obs.), but care should be taken to prepare for this incident. Keep carbon in the filtration system and always have several pounds of fresh carbon on hand in case of an inking emergency. Siphon out as much ink as possible and do a large water change.

Smithsonian Marine Station at Fr. Pierce reports “Bursatella leachii is a grazing benthic detritivore/herbivore that feeds primarily on cyanophytes and diatom mats and films found on sand, mud and other benthic substrata. It can also facultatively consume some macrophyte material such as Ectocarpus and Enteromorpha (Paige 1988, Rudman undated). Wu (1980) and Clarke (2004) report a possible dietary preference for Enteromorpha over cyanobacteria in the Pacific populations, but such preference appears not to be universal.

Ragged sea hares are known to consume Lyngbya majuscula (=Microcoleus lyngbyaceus), a cyanobacterial species abundant in the IRL and other shallow marine systems of Florida. Sea hares are likely to derive a dietary benefit from sequestering toxic metabolites (e.g., lyngbyatoxin-a) in the digestive gland and in bodily secretions (Capper et al. 2005).”