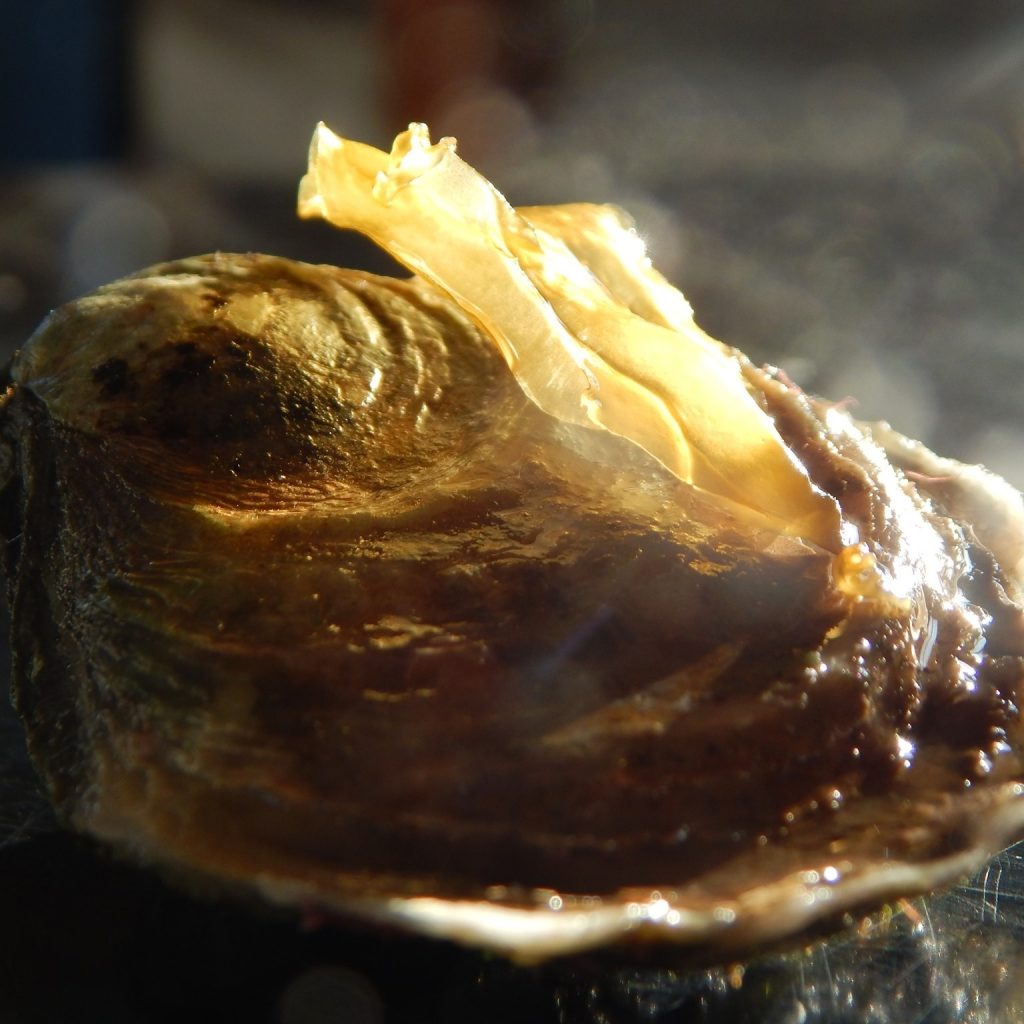 Bivalves (oysters, mussels, clams, cockles, scallops etc.) have evolved to be some of the most powerful biofiltration agents in freshwater, estuarine and marine ecosystems. Their ecological value in the wild has been well documented as species such as the Eastern Oyster (Crassostrea virginica) and the blue mussel (Mytilus edulis) are well known for their ability to form ‘reefs’ which support a diverse assemblage of associated macroalgae, invertebrates, fish and marine mammals. These oyster reefs and mussel beds foster higher levels of biodiversity by creating physical structures, filtering the surrounding water and by producing nutrient-dense gametes, larvae and juveniles to be preyed upon. Aquatic farmers worldwide have long realized the potential value of farmed shellfish, not only for direct consumption–but to mitigate the waste/support the growth of other species (shrimp, finfish, crabs, sea cucumbers, corals, seaweed etc.). Because of this utility, the role bivalves are playing in Global Aquaculture is constantly expanding—this begs the obvious question:

Why not Use Shellfish to Filter Aquariums?

Most innovations in the aquarium industry have been based around the removal of organic and inorganic wastes which naturally accumulate as a result of housing fish and other heterotrophic critters. Some of these wastes, such as ammonia, nitrite and sulfides, can be acutely toxic to fish and inverts–killing them outright. Other wastes, such as nitrates, phosphates and waste carbons, accumulate over time–chronically destabilizing the health of sensitive fish and corals, while at the same time, fueling the growth of pest algae and pathogenic bacteria. Thus, an aquarium with minimal biofiltration agents is always in the process of accumulating these wastes and thus demands routine water changes and chemical filter media in order to achieve a baseline level of stability. Biofiltration agents, such as bivalves, offer a heightened means of regulating these waste levels in between water changes–thus allowing for more prolonged periods of sustained biological-chemical stability. Bivalves feed by filtering the water around them and stripping it of its suspended particles. The adductor muscle allows a bivalve to control the flow of water around it, and also allows it to close its shell and cease filtration altogether. Filtration rates vary with species/strains/size and a meride of environmental conditions (salinity, temperature, pH etc). But overall, bivalve species can be loosely described as having a low, moderate or high filtration rate.

Specific filtration rates can be difficult to quantify and compare across taxa. However a ‘moderately’ powerful species such as the eastern oyster (Crassostrea virginica) can easily exhibit a filtration rate of 5-10 gallons/day, whereas oceanic species such as the blue mussel and sea scallop can filter well beyond 2 gallons/hr! With such filtration rates in context, even moderately powerful species can process the total volume of the average aquarium several times per day. Water which enters a bivalve is subject to an extreme degree of ultrafiltration. The labial palps are a specialized filtration organ which allows bivalves to discriminate between particles. Think of this organ as an elite sorting, shuffling assembly line–one that allows bivalves to gorge on the very base of the food chain. The labial palps allow oysters and other bivalves to identify and discriminate between phytoplankton cells, bacteria cells, free amino acids and minute organic matter (marine snow). Indigestible particles such as cysts, sand and other inorganic matter are identified and rejected by the labial palps. Rather than release these indigestibles back into the water, bivalves have evolved various means to package them into ‘pseudofeces’. Pseudofeces are often packaged in mucus and sink into the substrate below. In the aquarium, this would be a novel way of clearing tanks of dissolved inorganic solids, as pseudofeces can be easily gravel-siphoned. There is mounting evidence that the pseudofeces of species such as Crassostrea virginica are concentration sites for both nitrifying and denitrifying bacteria. 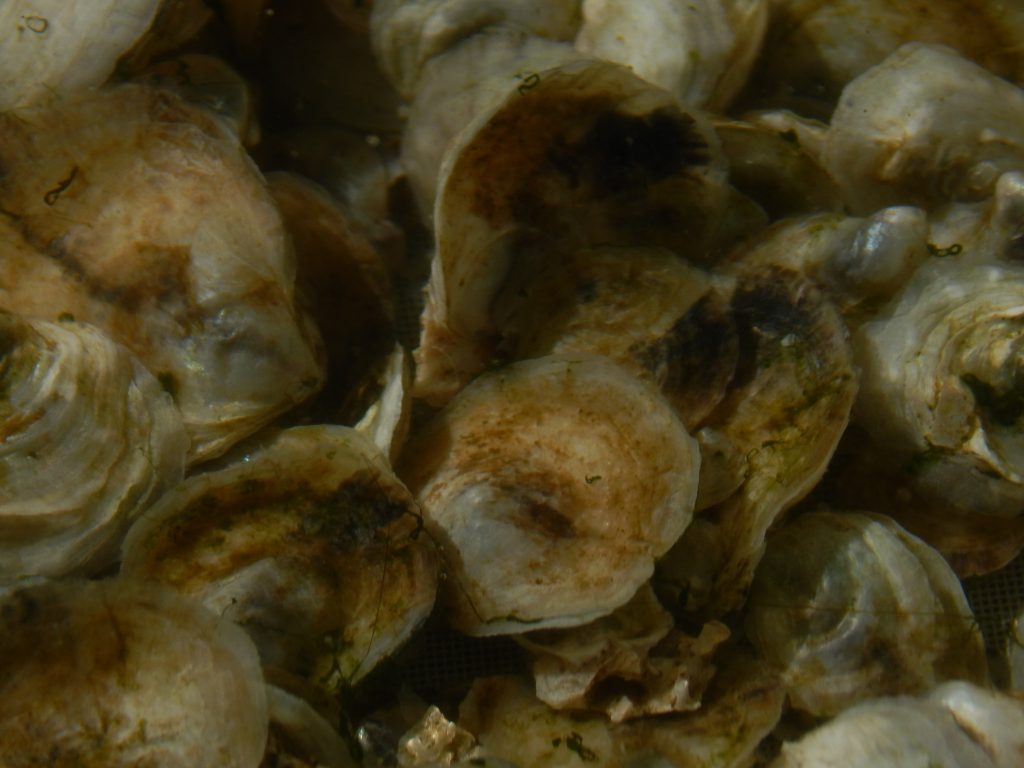 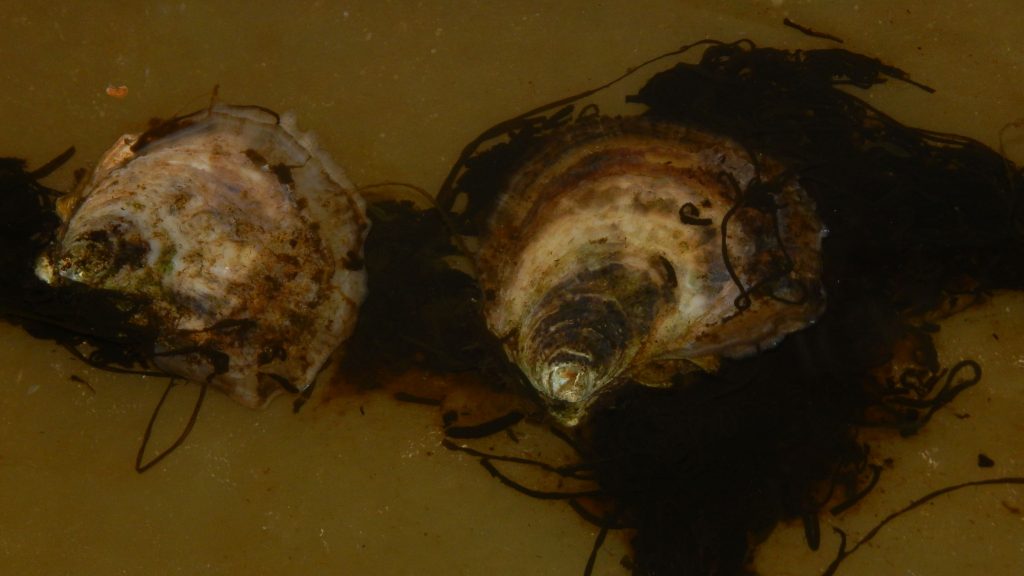 Despite how useful pseudofeces can be…there is great value in the particles bivalves actually digest. In the wild, shellfish reefs are principal consumers of microalgae, suspended bacteria, marine snow, detritus and free amino acids. This renders them the biological-functional equivalent of a solids filter, protein skimmer and UV sterilizer all in one! Every particle consumed by a bivalve reduces the load on these filtration units–increasing their actual efficacy. Moreover, the more a bivalve consumes, the greater its filtration rate becomes. Coupling conventional filtration with bivalve filtration has many beneficial avenues to offer the aquarist. Firstly, it will combat/minimize the occurrence of ‘green’ water as suspended phytoplankton will have a difficult time blooming when subject to constant grazing pressure. Water cycling through bivalve filtration will be subject to a microbiome capable of processing waste ammonia, nitrites, nitrates, phosphates, sulfides and carbons. Pathogenic bacteria, such as Vibrio coralliilyticus, as well as coral-specific viruses must infect a coral with a minimum amount of infective agents in order to manifest disease. If there is constant bivalve grazing occurring, this lessens the chance that this threshold will ever be met. The same is true for fish pathogens such as the parasitic protozoan marine ich (Cryptocaryon irritans) and the parasitic dinoflagellate (Amyloodinium ocellatum) which rely on a free-swimming stage (theronts/dinospores) to infect new hosts. These infective cells can be intercepted with enough bivalve filtration, so as to reduce the risk of fish infection. This is especially valuable for these parasites for which there is as of yet no effective, ‘reef safe’ therapeutic cure for. 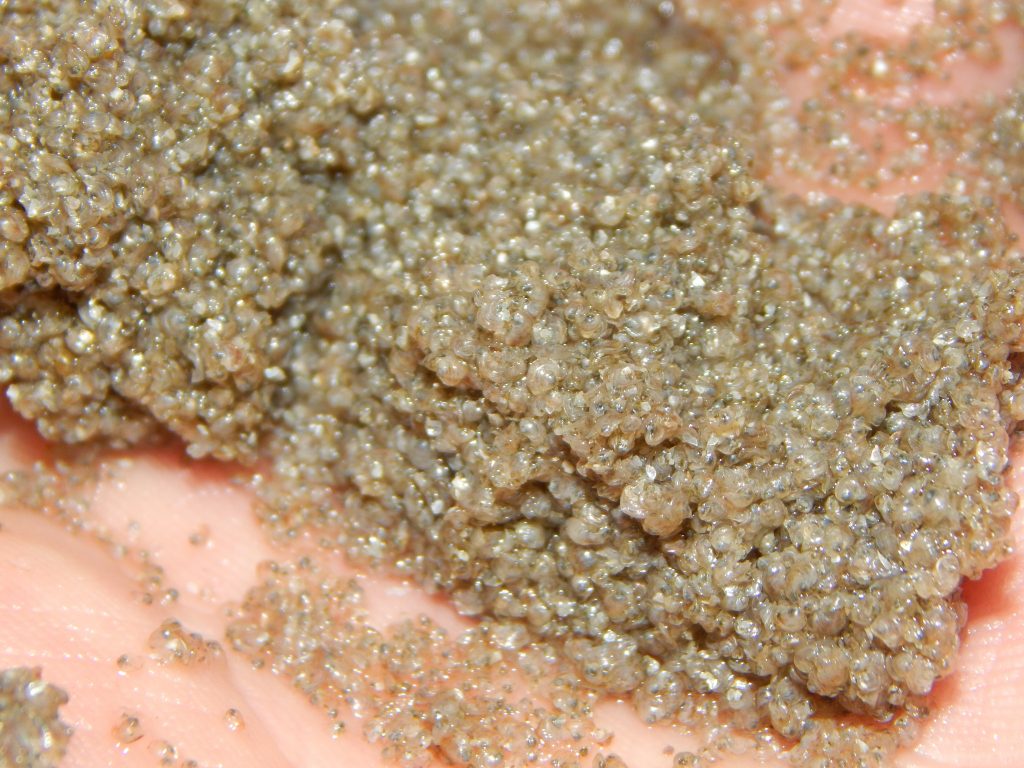 Oysters and other bivalves have many established applications in the aquarium industry beyond the realm of biofiltration. Oyster egg, sperm and macerated tissue is used to make high quality foods for non-photosynthetic corals, jellyfish, sabellid worms and other finicky filter feeders. At scale, shellfish tissue can be incorporated into an enormous array of pelleted and frozen food products for reef fish and invertebrates. Newly hatched shellfish larvae have also proved to be a valuable first feed in the aquaculture of marine fish larvae. This hints at a complete array of avenues for the aquarium industry to reutilize surplus shellfish produced through biofiltration. In the wild, oysters and other bivalve species operate as ‘keystone’ organisms. When they thrive, they form reefs which provide the bioactive structure and water filtration needed to allow millions more species to thrive. The biofiltration delivered by bivalves is profound because it acts on a mechanical and bioactive level. Indigestible particles are packaged and removed from the water column increasing light availability to corals, plants and other photosynthetic organisms. Suspended microbes such as microalgae, bacteria and fungi are grazed by bivalves, assisting in water clarity, lessening the toll on UV filters/protein skimmers and reducing the overall ability of these microbes to manifest nuisance/disease. Even dissolved wastes such as ammonia, nitrites, nitrates and phosphates can be efficiently processed by the bacterial microbiome associated with bivalves. With the profound benefits of bivalve-based filtration mounting, there is little doubt that more aquaculture farms, public aquariums and reef aquarists alike will be experimenting with oysters in their sumps over the coming years.