The Goldflake Angel: A True Beauty 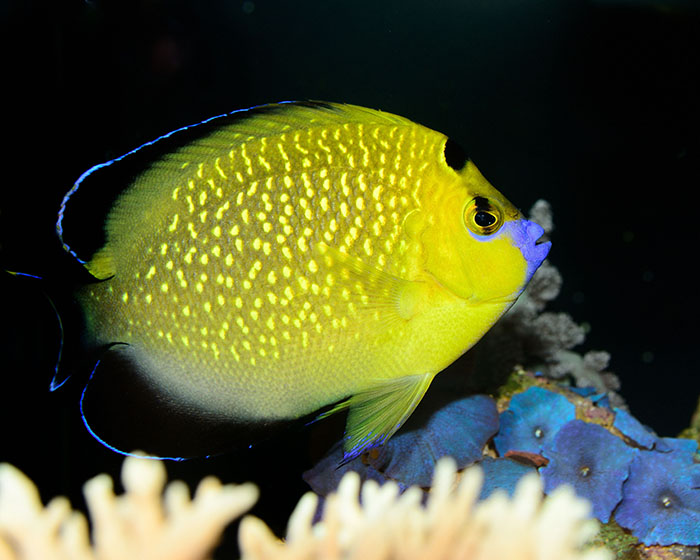 I’ve had a long love affair with this fish ever since I first met one in an aquarium in London, in fact when I decided I’d offer this piece to my good friends at Reefs.com, I’d made up my mind to purchase a specimen, but my recent tax demand and my less than full bank account means I might have to hold off on that purchase, but one day…

So Why is the Goldflake so Special? 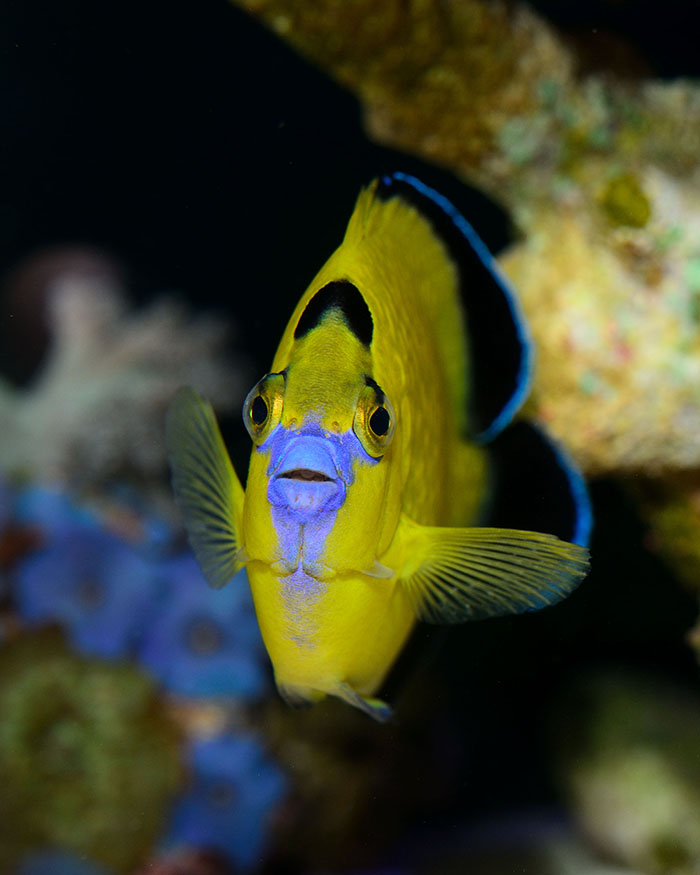 Juveniles sport a vertical eye stripe which fades as the fish matures leaving a small patch above the eyes and a slight ‘bandit’ mask. As is the way with several angels and indeed a trait that several other Apolemichthys species show, young specimens have a very visible eye spot (ocellus), located to the upper rear of the fish where the dorsal merges with the flanks. This fades quickly as the eye spot merges with the darkening that occurs to the fins as the fish moves into its late juvenile stage.

As with many ‘collectable’ fishes, the Goldflake commands a fairly hefty price tag and this confers upon it a status amongst fish keepers that either shows its owner fat wallet or a commitment to the hobby or both – let’s face it both are going to be necessary! Don’t despair though, there are some alternatives that I’ll discuss a little later on, with a few that won’t lead to penury.

The Goldflake’s price tag is largely due to a limited supply of the fish; whilst the fish is common enough across its range, it is not as widespread as cheaper fish such as A. trimaculatus. I imagine if the biogeography of both species were transposed then collectors would hanker after trimaculatus instead. Though I am perhaps being a little grumpy as I can’t afford to enter the world of the ‘fish collector’, the Goldflake really is a sumptuous fish in its own right and not just because it is rare.

The excellent, Angelfishes: A Comprehensive Guide to Pomacanthidae by Debelius et al., lists the Goldflake as hailing from several Pacific island regions from the Cook Islands to Micronesia. This is a vast area, but presumably doesn’t have the infrastructure to make fish collection as economically viable as it is in other regions – though I am happy to be corrected. 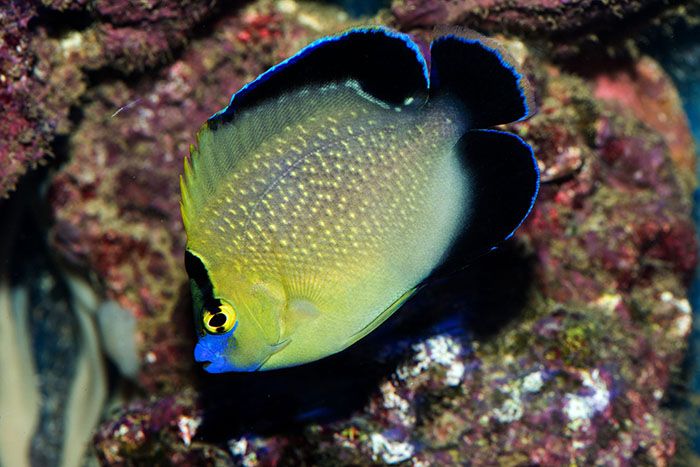 It may also be that because the fish was only described in 1973, and is thus fairly new to the industry/hobby, it is still considered a ‘new’ fish, despite being found across several reef habitats from three to fifty metres (according to Debelius). I should also add that unlike some very localised Pomacentrid species A. xanthopunctatus is listed as Least Concern, by the IUCN with a stable population and makes a more ethical choice than fish such as the Clarion.

The Apolemichthys genus contains only nine species of medium-sized fish, larger than the Centropyge, but smaller than the Pomacanthus species. The Goldflake is said to reach 25cm in the wild, but is not likely to achieve this in captivity. In the wild the fish, like many of its relatives from across the Order has a very varied diet, feeding on algae; invertebrates, sponges, sea squirts and so on… essentially it’s an omnivore and will bring this behaviour into captivity. Several sources suggest that the fish is best fed two to three times per day with a mix of vegetable matter and specially prepared foods for angelfish species (several are available that contain sponge material), along with more standard fare such as frozen mysis shrimp.

Now we must come to the matter of being reef safe – or not! A quick search on any well-visited hobbyist forum will find numerous accounts of reef keepers who are very pleased with their ‘model citizens’, with sadly, a cohort of disappointed aquarists saying that their fish developed a taste for zoanthids, LPS corals, clams, tube worms and on rarer occasions SPS corals. From what I can glean online and from conversations with the aquarists I’ve met who have these fish, they are some of the least likely angel fish to be troublesome in a reek tank, but each fish may have their own opinion on the matter. Young fish seem to be well-regarded, but as they mature they may well take a liking to zoanthids, or the mucous on clam mantles (whilst the clam is not nipped directly, the interference may well cause its demise), or a collection of Scolymia or Trachyphyllia perhaps. In essence you cannot guarantee a Goldflake (or indeed any angel other than perhaps the Genicanthids), will be reef safe for its entire life expectancy, and they can easily live for ten years or more. Needless to say, regular and varied feedings and a large tank (100 gallons or more is required), may limit and ‘spread’ any disruptive behaviour and allow you to observe the fish and take action more easily if inverts are showing signs of stress.

Needless to say, FOWLR aquarists will have none of these problems and whist I’d miss my corals I can’t help but envy the fish only folks sometimes. 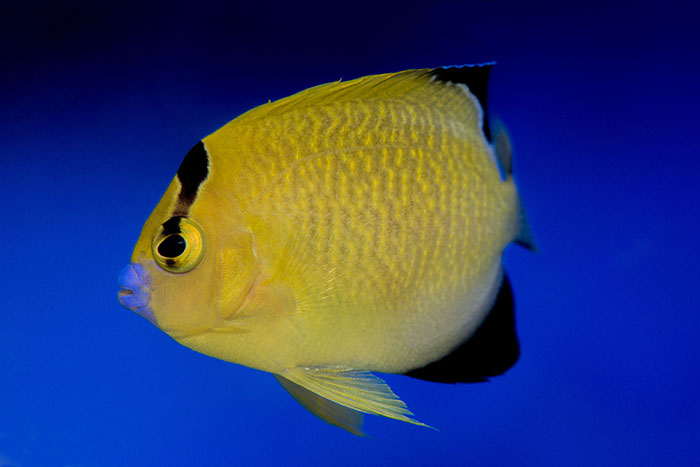 Despite all the doom-laden warnings, I recently visited a tank, stuffed full of excellent SPS and LPS corals including tasty looking Duncans and Catalaphyllia along with four superb clams with the resident Goldflake showing no interest in nipping or chewing on any of them – though I’d have to accept that the fish is not yet fully grown and has the potential, to change its character. It did exhibit one piece of unusual behaviour though; it would pass over and gently rub its gill cover (starboard side only) on the mantle of a very large Tridacnid clam. The clam has presumably become accustomed to this behaviour and no longer responds, but it was interesting to see that the fish did not bite or nip any of the tissue and only rubs against a very specific location on one clam only.

Tanks for Goldflakes will need to be as large as possible, the bigger the better of course to provide as many natural algae grazing opportunities as possible and to give the fish the freedom to roam and explore. In the wild these fish stay close to the reef and will relish a décor replete with caves, overhangs and crevices into which they can retreat should they wish – a wall of loosely stacked (but secure) live rock would be ideal. Whilst they can be, on occasion, aggressive with similar fish and congeners, they can also be bullied by larger angels and the tang police!

Given enough space the Goldflake itself is quite tolerant of other fishes though the standard rules apply – assume it will not tolerate very similar species without careful planning, but in the main it has a peaceable demeanour within a typical aquarium community and is fairly resistant to disease and hardy if well fed and given good water conditions, but then we should be offering those to every fish we keep.

Similar Species and Other Suggestions 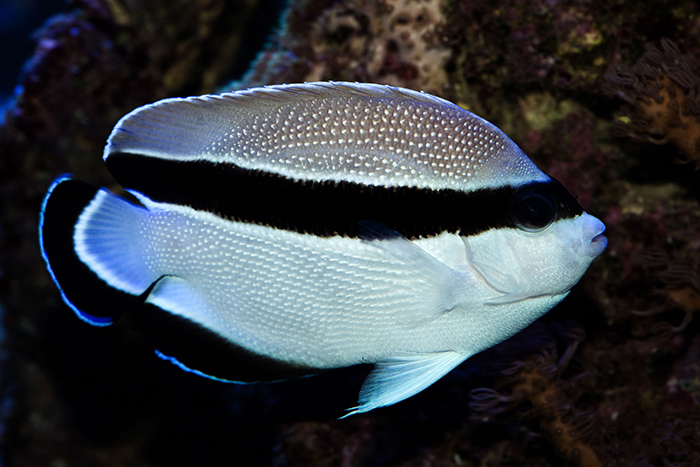 The other ‘collectable’ species within the genus is the Hawaiian native, A. arcuatus. The Bandit Angel is very similar in nature, though is not regarded as generally reef safe, you’ll also need a healthy bank account to acquire one. Another even more expensive relative is A. kingi from the south eastern coast of Africa that is reported as being difficult to catch and often found below 20m. I have to say that I think the Tiger is nice enough, but not particularly attractive and if I could afford one, I wouldn’t…if you see what I mean. 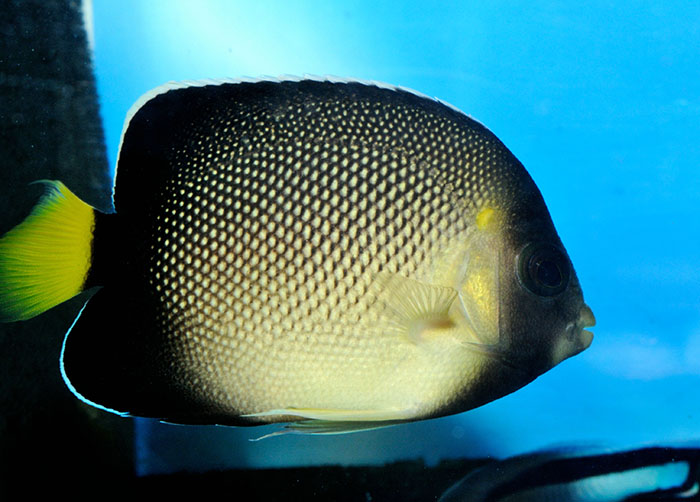 Among the genus, A. xanthurus and the very similar A. xanthotis from the Red Sea and Arabian Peninsula area ((and down the African coast to Kenya), are very attractive, but pretty much monotone. Both fish are referred to as ‘smoke-angels’ and do indeed have a smoky look to them which always makes me want to tweak the clarity or vibrance sliders in Photoshop when I’m reviewing images of them. A. xanthurus is more commonly seen in the trade and is considered easy to keep in captivity. 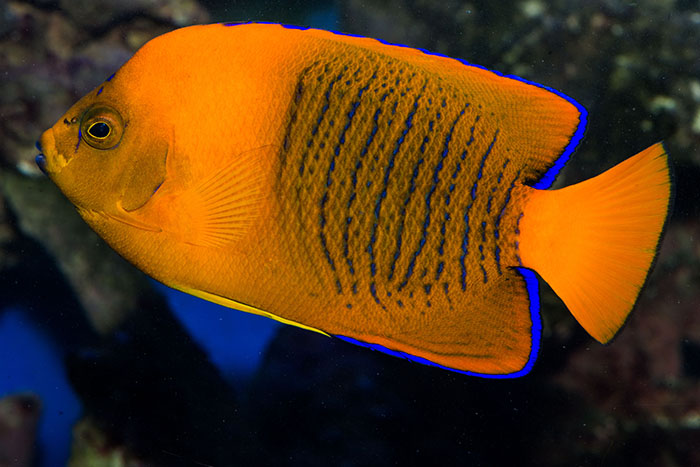 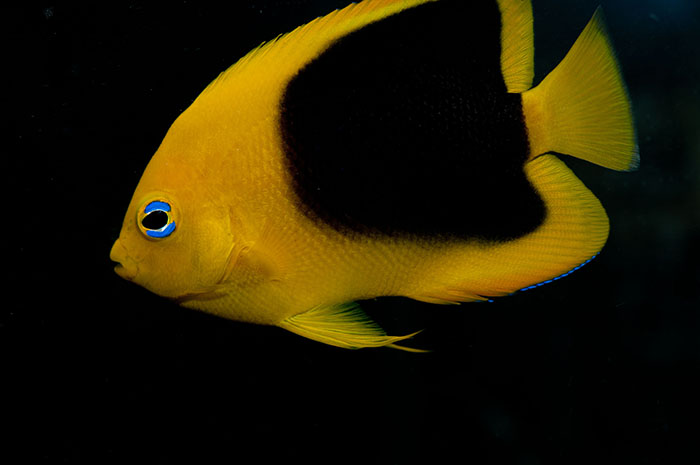 Should you wish to venture further away from this genus you may consider the previously mentioned Clarion from the closely related Holacanthus genus or perhaps the Rock Beauty, H. tricolor. If you have the tank space then you might consider Pomacanthus xanthometopon perhaps, but then this is venturing into the really large angels. In the other size direction you might consider one of my other favourite fish, Centropyge flavissima or the less hardy (in my experience), C. heraldi or C. woodheadi, again assume corals will be munched! 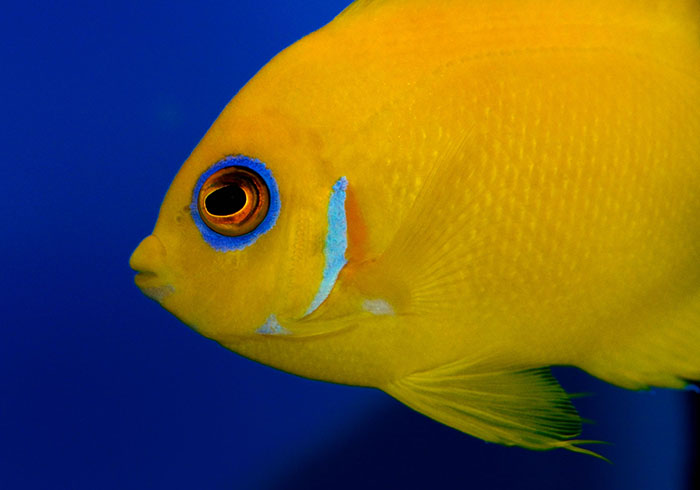 In conclusion, there is no debate that the Goldflake is a jaw-droopingly beautiful fish, characterful, fairly easy to care for and a superb sight in any aquarium. Its only downside, apart from the price (you might not want to let a non-fishkeeping partner see that receipt), is its possible coral nipping character. So if you do buy one, prepare for the worse, just in case… 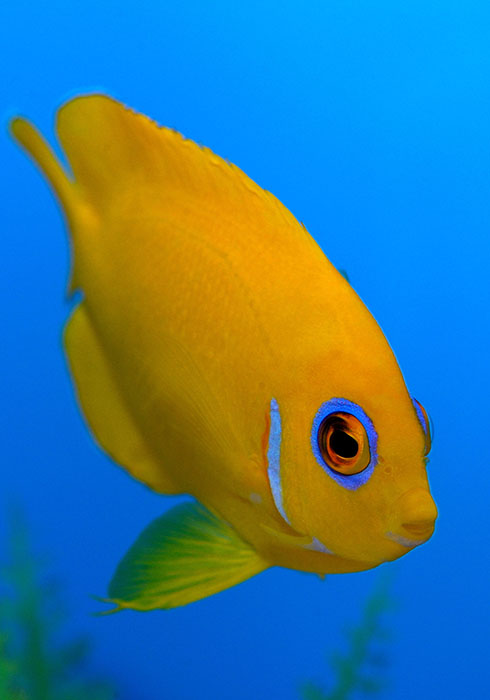