The Hero Called Berghia: Noble Nudibranchs for Biocontrol of Aiptasia sp. in the Reef Aquarium 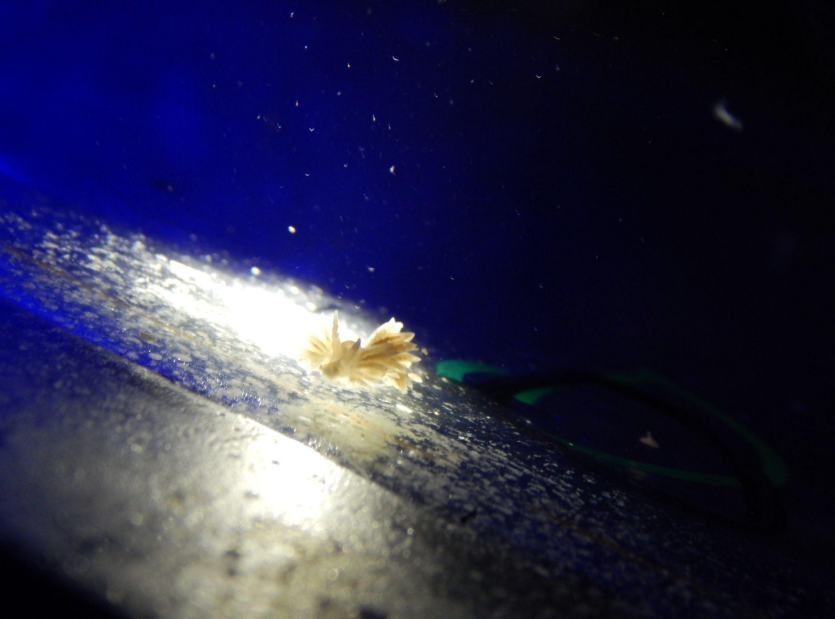 Aiptasia sp. anemones are one of the most persistent and troublesome pests in the contemporary reef aquarium industry. Aiptasia are easily introduced to new aquarium systems as hitchhikers on corals and live rock. Once introduced, they rapidly reproduce and are able to colonize a wide variety of substrates, using stinging nematocysts to aggravate/kill coral tissue. Aiptasia are able to form a limited symbiosis with Symbiodinium sp. dinoflagellates, further allowing them to compete with corals for illumination. Not only that, Aiptasia can exist in a ‘bleached’ state, allowing them to colonize the dark innards of piping, pumps, sumps and inner rockwork and utilize these hard-to-reach places as reproductive reservoirs. They are able to thrive in these dark areas by feasting on suspended phytoplankton, zooplankton and organics. This means they compete with coral for food resources, while reducing the overall flow rate of the aquarium system. Conventional management strategies for Aiptasia include mechanical and biological methods. Currently there are no commonly used chemical broadcast treatments, due to the close taxonomic relationship between Aiptaisa anemones and many coral species. Mechanical removal tactics include scraping, gluing, and substrate/piping replacement. Many of these methods are extremely labor intensive and largely not applicable for larger scale systems in facilities such as commercial coral farms or larger public aquariums. Biological control methods have largely been accepted as the most desirable form of Aiptasia management, but all biological control is only truly effective if it is specific and affordable. Species such as peppermint shrimp (Lysmata boggessi), copperband butterflyfish (Chelmon rostratus) and aiptasia-eating filefish (Acreichthys tomentosus) are common candidates for Aptaisa biological control. Each has its inherent strengths but are limited in their ability to pursue Aiptasia populations hiding in piping, inner rockwork, and other difficult to reach crevices. Depending on what food items are available, these species may not ruthlessly pursue Aiptasia. For this reason, the reef aquarium industry has hungered for a new, efficacious biological control agent for Aiptasia! They have found it in a humble nudibranch…a sea slug…a natural predator which can hunt pest anemones in every pore of rockwork, over every inch of pvc, and on every overflow grate. In Berghia, the reef industry has found a weapon to fight Aiptasia WHEREVER it thrives!

Berghia stephanieae (Aeolidiidae) was embraced by the scientific research community as a model marine nudibranch which could be easily housed and aquacultured in the laboratory. Most marine nudibranchs are difficult to house in aquaria because of their specific dietary needs such as specific macroalgae, coral or specific microbial biofilms. Berghia was so favorable because it feasted only on anemones in the genus Aiptasia–which are very easy to cultivate in the laboratory. The result of this convenience has been the creation of a myriad of papers intimately describing the life cycle of Berghia stephanieae as well as manuals describing its aquaculture. 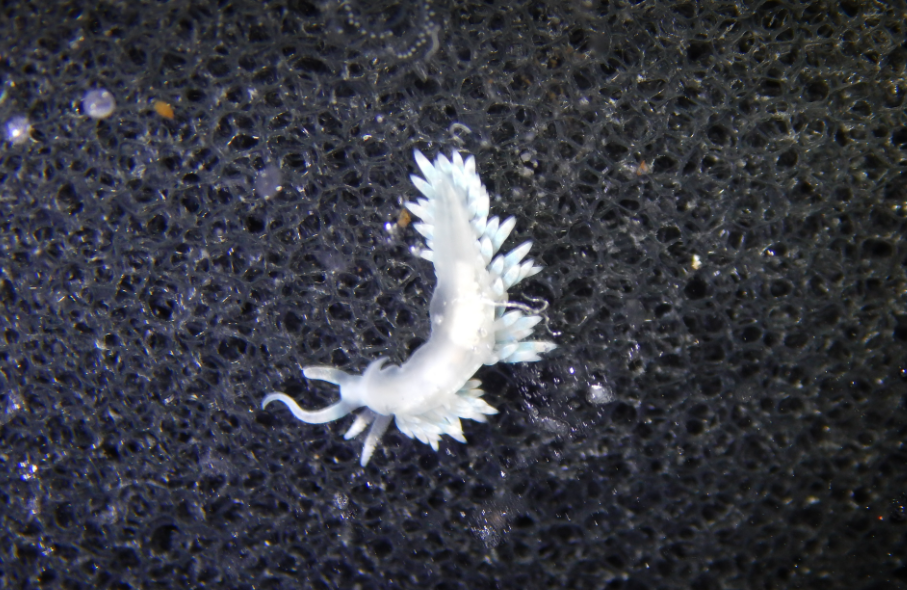 One of the reasons Berghia stephanieae was of such interest to research scientists was that the species exhibited poecilogony, the ability of Berghia eggs to hatch either as planktonic larvae (veligers) or fully-developed juveniles. This developmental variation allows Berghia populations to sustain themselves in areas of sufficient food supply as well as enabling them to scatter offspring to new pastures. Whether or not Berghia offspring hatch as larvae or juveniles is directly dictated by the nutritional status of the parent. Juvenile Berghia must consume Aiptasia 3-4 days post hatch/metamorphosis. They have a limited capacity to consume larger Aiptasia and thus must hunt smaller individuals. Montiero et al 2020 demonstrated how cut Aiptasia fragments could be used as a convenient alternative for feeding smaller Berghia. Production characteristics of Berghia, such as growth rate and reproductive output, are directly affected by the nutritional quality of the Aiptasia fed. Leal et al 2012 observed markedly different fatty acid profiles between bleached and unbleached Aiptasia sp. Pigmented individuals engaged in symbiosis with Symbiodinium dinoflagellates had increased levels of palmitic acid and docosahexaenoic acid (DHA). Berghia feeding on these pigmented Aiptasia exhibited faster growth rates and increased fatty acid contribution to eggs. This cascades to offspring nutrition as the resulting eggs produced higher ratios of post-metamorphosed juveniles over planktonic larvae.

Like Aiptasia, Berghia are able to engage in a limited symbiosis with the Symbiodinium dinoflagellate. Kempf et al 1991 observed the transfer of live zooxanthellae cells from a consumed Aiptasia pallida. Rather than becoming digested, the dinoflagellate cells were phagocytized by nutrient-processing cells inside the Berghia’s digestive diverticulum and stored alive inside vacuoles concentrated in the nudibranch’s gill-like cerata. Presumably, nutritional exchange occurs between the algae cells and the nudibranchs’, but this exchange is not a stable one and arguably not mutualistic. If starved for 6 to 8 days, Berghia will purge their symbionts and require re-inoculation through feeding. Because of the increased nutritional profile associated with dinoflagellate-symbiosis, optimizing illumination (light spectrum/intensity/photoperiod) is a pressing consideration in refining the aquaculture of Berghia stephanieae. 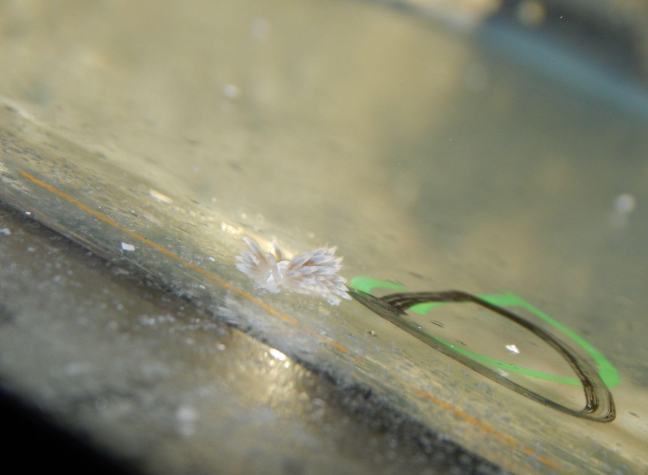 Adult Berghia stephanieae are hermaphroditic and become reproductively competent 40-50 days post hatch. As they grow, they produce increasingly-sized, white spiral egg masses containing 60-2000 eggs, and adhere these to various substrates. Carroll et al 1990 observed consistent egg hatching occurring 11 to 12 days post lay at 23.9C, but Martinez-Pita et al 2005 reported 55 to 60 days at 22C. Aeration and water agitation has also been suggested to accelerate egg maturation. Regardless, this means that many generations can be produced over a relatively short
period, with each individual reaching marketable size at 30 days old. This species also has cultivation restraints as it is an obligate feeder of anemones, meaning that a feeder colony of Aiptasia must also be continuously maintained. This obligate feeding is Berghia’s greatest asset as a biocontrol agent as well as one of its drawbacks. It is common for a reef aquarist to experience great success reducing Aiptasia populations in their tank by introducing Berghia, only
to have outbreaks occur months later. This is because Berghia can and will starve to death if deprived of Aiptasia over a period of days to weeks. Tanks can therefore become subsequently infested by any Aiptaisa introduced on new coral or rockwork. The high likelihood of Aiptasia reintroduction partnered with the difficulty of maintaining Berghia populations in display reef aquaria have made commercial aquaculture of this species a must.

It is in the collective interest of the reef aquarium industry to control and mitigate the spread of unwanted Aiptasia across facilities and systems. This single pest alone is responsible for millions in lost livestock value, due to its ability to aggravate, scar, kill, and infest coral frags/colonies. Berghia stephanieae is the ideal biocontrol agent for Aiptasia mitigation because of its small size, selective feeding and ability to be aquacultured on a mass scale. Commercial production of Berghia stephanieae is best undertaken as an accessory project of established inland coral aquaculture facilities and coastal mariculture facilities. Such operations not only possess the established infrastructure and personnel to conduct large scale aquaculture of Berghia, but are also likely the greatest consumers of Aiptasia biocontrol agents. With the present supply of Berghia so low, few facilities can purchase enough individuals to fully satisfy their own needs, let alone enough to offer a consistent surplus for retail. The creation of large-scale Berghia cultivation would decrease the price of Berghia ‘treatments’ to the commercial operators, maximizing the amount of ‘redeemed’ value of coral not damaged/destroyed by Aiptasia. A production surplus of Berghia stephanieae would allow for a consistent supply to become available for retail purchase–expanding the overall market value of the species. 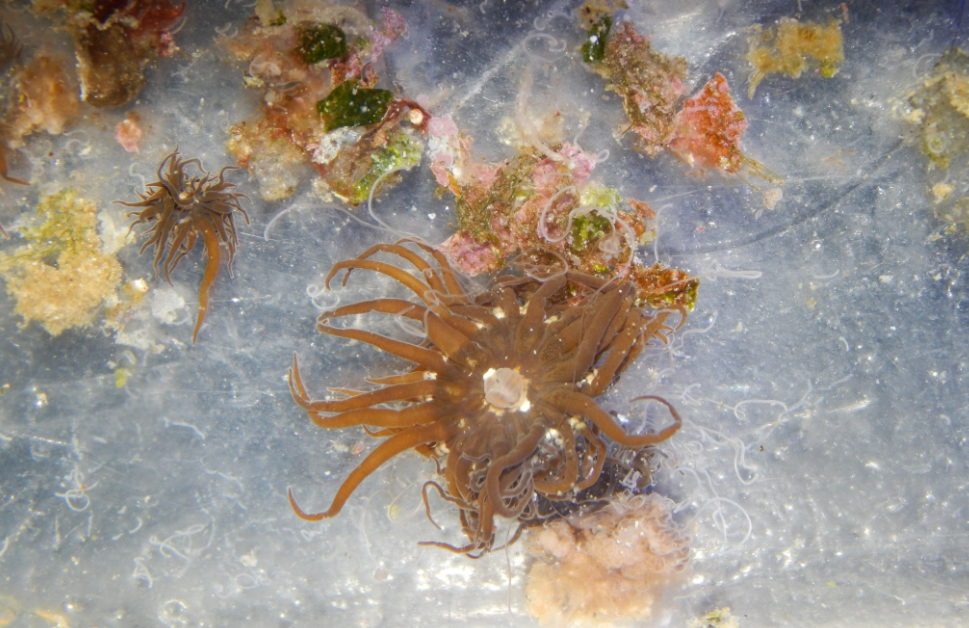 The average reef aquarium is likely to be infested with Aiptasia during the course of its existence. There are few true efficacious solutions to permanently remove Aiptasia sp. populations and prevent them from reducing flow, stealing food, and stinging coral. That is where the hero called Berghia saves the day. Berghia feast on Aiptasia big and small. They have evolved with their prey for millennia. They use their stalk-like rhinophores to smell out Aiptasia, steal their algae, and gain their power. When the pest anemones are hunted to extinction, the Berghia will also vanish. But if sustainably aquacultured, this noble sea slug can always be summoned by the consciousness reef aquarist–-to hunt Aiptasia WHEREVER it thrives!

Ellis, I. (2010). Investigations of Neural Ontogeny in the Larval Oyster Crassostrea virginica and the nudibranch Berghia verrucicornis: A Histological and Immunohistochemical Approach (Doctoral dissertation).

Maroyan, A. (2021). The Time Course and Neuroanatomy of Rhinophore Regeneration in the Nudibranch Berghia stephanieae.