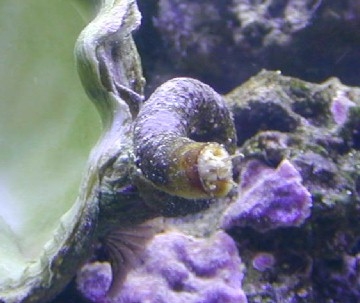 Although they look like tubeworms, vermetids are actual a kind of snail which grows with its shell in place either on rocks or inside coral skeletons. Since they can?t move around, vermetid snails instead employ a unique by annoying form of filter feeding. Unlike beautiful Christmas Tree Worms which use their colorful gills to filter food from passing water, vermetids use a net made of sticky slime.  In a vacuum there is no harm to vermetid snails unique life style but on the reef and the reef aquarium, this slime net is a big problem for their neighbors. Most alarming is how the slime net of vermetid snails irritates the corals they often grow in and around, causing polyps to remain retracted and instigating tissue loss.

Simply put, there was a direct positive (=bad) association between the number of Vermetids in or near a coral, and the number of lesions that the coral showed. Corals with fewer or no vermetids in their vicinity were healthy and mostly devoid of any lesions or tissue recession.

So the moral of the story is that you should remove vermetids from the aquarium if you see them, remove them from corals and clams added to the aquarium, and generally go on the offense against this slimy pest. Unfortunately, in our high nutrient reef tanks certain species of vermetids can reproduce in aquariums, and the small offspring often lodge themselves in inaccessible places, inside the rock, the sump, and various pieces of reef aquarium gear.
The first line of defense is to mechanically remove them, spear them, or in some cases you might be able to simply super glue their trapdoor shut. We’ve also wondered about the potential to train small Canthigaster sharpnose puffers to eat vermetid snails, but you also have to be mindful about what else they might prey upon like other molluscs and crustaceans.