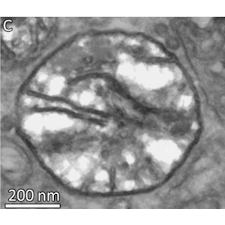 It’s not unusual for parasites to lose various pieces of anatomy or chunks of their biochemistry as evolutionary forces, over time, place pressure on them to stop wasting biological ‘effort’ on redundant and useless parts of their biology.  This species though, is quite different, it has lost the ability to breathe.

The small parasite, barely a ball of cells called Henneguya salminicola, infects salmon tissue and has, in effect, given up on consuming oxygen like the rest of us multi-celled creatures.  Wondering what a Myxozoan is, I had a quick look at Wikipedia:

“it is now understood that myxozoans are highly derived cnidarians that have undergone dramatic evolution from a free swimming, self-sufficient jellyfish-like creature into their current form of obligate parasites composed of a mere handful of cells”

The study by scientists at Tel Aviv University has been published in the Proceedings of the National Academy of Sciences.

“Aerobic respiration was thought to be ubiquitous in animals, but now we confirmed that this is not the case,” Professor Huchon, lead researcher explains. “Our discovery shows that evolution can go in strange directions. Aerobic respiration is a major source of energy, and yet we found an animal that gave up this critical pathway.”

Many lifeforms can exist without the ability to utilize oxygen, but this is the first time it has ben identified in a multicellular animal.

The species’ abilities were found by accident.  When its genome was sequenced it was found not to have the genes necessary to form mitochondria, the organelle where oxygen is respired and energy for cellular functioning is liberated.

“It’s not yet clear to us how the parasite generates energy,” Prof. Huchon says. “It may be drawing it from the surrounding fish cells, or it may have a different type of respiration such as oxygen-free breathing, which typically characterizes anaerobic non-animal organisms.”

According to Prof. Huchon, the discovery bears enormous significance for evolutionary research.

“It is generally thought that during evolution, organisms become more and more complex, and that simple single-celled or few-celled organisms are the ancestors of complex organisms,” she concludes. “But here, right before us, is an animal whose evolutionary process is the opposite. Living in an oxygen-free environment, it has shed unnecessary genes responsible for aerobic respiration and become an even simpler organism.”