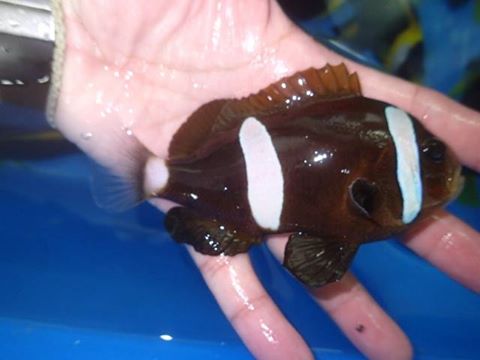 This incredible specimen was discovered in a shipment of fishes from Southeast Australia and appears to represent the first recorded hybrid for one of the most sought after species of anemonefish, Amphiprion latezonatus. Known variously as the Wide-band or Blue-lip Anemonefish (or, more affectionately, as the “Latz”), this species is very rarely collected from the wild and is typically among the most expensive members of the genus.

It occupies a unique lineage within Amphiprion—one which is thought to have diverged relatively early on in the evolutionary history of the group. It’s natural range encompasses a limited number of subtropical reefs in the Southwest Pacific, including New South Wales in Australia, as well as the scattered oceanic reefs of the Lord Howe Seamount Chain. And we can find corroborating evidence for this fish’s distant origins in its many peculiar traits.

The Latz is the only member of the diverse anemonefish lineage with a refractive blue line above its mouth, and one of only a few with such an exaggerated middle bar. The coloration of the caudal fin is also quite unusual, with a straight line that demarcates the dark anterior portion from the hyaline posterior margin. And the olivaceous tinge found in and around the spinous dorsal fin similarly sets it apart, being comparable only to A. milii (=clarkii) of Northwestern Australia. What this all amounts to is an anemonefish like no other, and it is exciting to at last see what its hybrid looks like.

The only other anemonefish found alongside it in subtropical Southeastern Australia (and thus the only other plausible parent) is A. akindynos. I’ve written at length about this fish before, and the current taxonomic confusion that surrounds it. Put briefly, A. akindynos is almost certainly a subtropical endemic in the same mold as A. latezonatus; however, the very similar Barrier Reef Anemonefish (A. cf clarkii) found along tropical Eastern Australia has long been confused with it.

The mix of parental traits in this hybrid individual is intriguing to say the least. The overall color is almost perfectly intermediate between the umbrous brown of A. akindynos and the black of A. latezonatus, with dark ventral fins that are more typical of the latter. The caudal fin is Latz-like in its truncated shape (versus weakly emarginated in A. akindynos), with a faint trace of black present beyond the third white bar. And the middle bar is noticeably wider than in A, akindynos, but still far narrower than in A. latezonatus. It’s as if these two species were put into a blender, and out came a perfect amalgamation of their traits. Has there ever been a more thoroughly hybrid looking hybrid?