By Austin Lefevre 6 years ago4 Comments 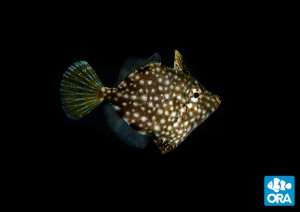 ORA has added another fish to their growing list of successful captive bred offerings, this time it’s a little filefish! Filefishes in general just make me smile. Their goofy demeanor and camouflaging ability make them very intriguing. Most of the time when I add them to a clients aquarium they’re referred to as “that ugly fish”, however that “ugly fish” keeps their reefs devoid of pesky aiptasia anemones.

The Whitespotted Pygmy Filefish (Rudarius ercodes) is generally found in temperate waters in Japan down to Taiwan, although ORA notes, “Our pairs were happily spawning throughout the summer months when our broodstock tanks regularly get into the mid 80’s.” Being a dwarf species of filefish they attain a maximum length around three inches, making them a perfect candidate for smaller to mid sized reefs. ORA has placed these fish in aquariums containing hard and soft corals with no nipping observed. Most other filefish in my experience will nip here and there, although contrary to common forum regurgitation I’ve not had any issues with them actually damaging coral long term in any of the dozen or so systems I currently have them in. Aiptasia on the other hand are a top choice menu item for many filefish. Having zero first hand experience with this species of filefish I cannot comment on their interest in the aforementioned nuisance anemones.

Two big thumbs up to ORA on another successful breeding project! I’m excited to get my hands on a few of these, and as always look forward to what ORA has up their sleeve next.