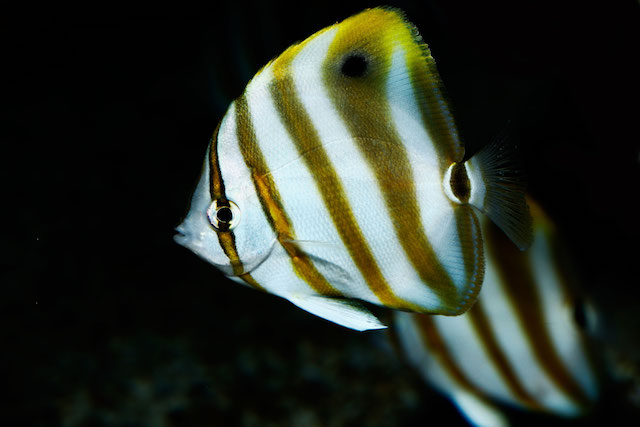 The Kite Butterflyfish is a unique member of Chaetodontidae that suffers from a state of taxonomic limbo. Placed in its own monotypic genus, Parachaetodon ocellatus adopts a somewhat atypical form with its significantly taller anterior profile. Recent molecular and morphological studies nests the species within Chaetodon, making Parachaetodon now defunct and obsolete. Although ocellatus is the oldest name for the species, the name is already taken by the Atlantic species Chaetodon ocellatus, which predates the use of ocellatus for this species. Should the move from Parachaetodon to Chaetodon were to occur, the Kite Butterflyfish would also require a change in its specific epithet, which means that it takes on the next available synonym – Chaetodon oligacanthus. The specific epithet “oligacanthus” translates to “fewer spines”, which was what dictated its initial placement in Parachaetodon. Although the molecular and morphological study strongly supports this change in its generic and subsequent specific status, it is still not widely accepted, and the Kite Butterflyfish in turn, masquerades under two aliases.

But what does all of this have to do with this article? Well, depending on your taxonomic stance and how updated you are on butterflyfish systematics, the success of this species raised in captivity could represent a first for the genus Parachaetodon, or the second (after C. klenii by Frank Baensch) for the genus Chaetodon. Thailand’s Samutsakorn Costal Fisheries Research and Development Center (SCFRDC) have succeeded in spawning and raising this species to settlement after completing 57 days of metamorphosis.

Developmental shots of the Kite Butterflyfish from larvae to juvenile. Photo credit: SCFRDC.

According to SCFRDC, broodstock parents were collected by bamboo stake traps as juvenile fish in rocky inshore reefs and seagrass beds. They were conditioned in 3m cube recirculation tanks and fed a diet comprising of fresh mussel, squid and shrimp. Once the broodstock reached their adult stage, sand worms were added at 5-10% by weight to enhance gonad maturation. Subsequent spawning occured nightly, producing semi-buoyant eggs. The fry were fed with rotifers enriched with commercial essential fatty acids. It is unclear as to whether or not these rotifers served as the sole food source during the entire developmental stages up to metamorphosis, and although it may seem unlikely, a quick consult with Dr. Todd Gardner revealed that there may be enough variation within a given genus or family that it may not be surprising that some larvae are hardy, or indiscriminate enough eaters.

Regardless, the captive breeding success of Parachaetodon ocellatus/Chaetodon oligacanthus is yet another milestone in the aquaculture paradigm, reaffirming the cumulative onerous undertaking at which the industry has had to overcome to get to where it is today. A big hearty congratulations to SCFRDC. Now the next pressing issue would be to standardise the taxonomic status of this butterflyfish.

*It is also worthy of mention that SCFRDC has also had success in captive breeding attempts of Chaetodontoplus mesoleucus and Centropyge bicolor, although the latter two are presented without the complete developmental stages shown here in P. ocellatus/C. oligacanthus.

Signs You May Need to Lower Your Reef Tank’s Bioload