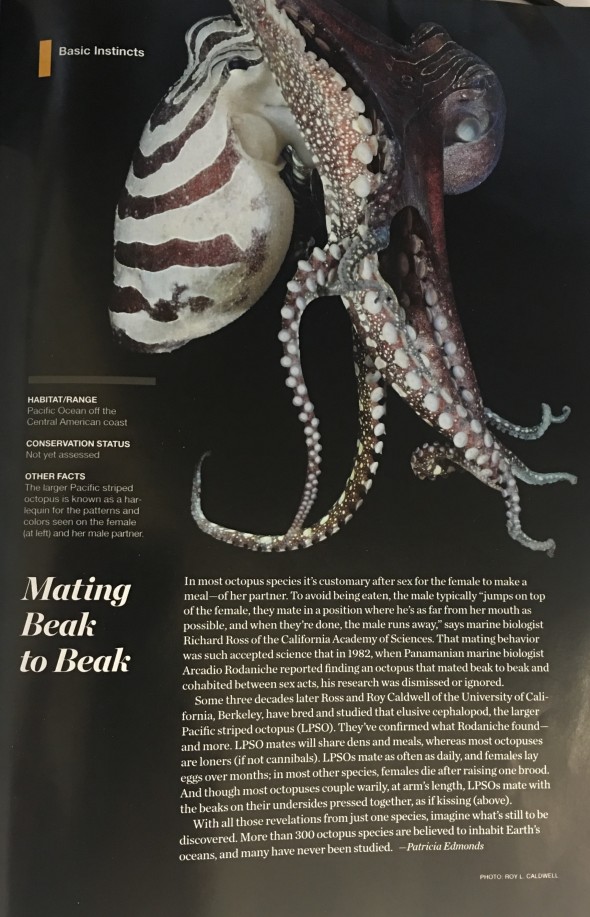 Text by: Patricia Edmonds. This story ran in the April 2016 issue of National Geographic magazine.

In most octopus species it’s customary after sex for the female to make a meal—of her partner. To avoid being eaten, the male typically “jumps on top of the female, they mate in a position where he’s as far from her mouth as possible, and when they’re done, the male runs away,” says marine biologist Richard Ross of the California Academy of Sciences. That mating behavior was such accepted science that in 1982, when Panamanian marine biologist Arcadio Rodaniche reported finding an octopus that mated beak to beak and cohabited between sex acts, his research was dismissed or ignored.

Some three decades later, Ross and Roy Caldwell of the University of California, Berkeley, have bred and studied that elusive cephalopod, the larger Pacific striped octopus (LPSO). They’ve confirmed what Rodaniche found—and more. LPSO mates will share dens and meals, whereas most octopuses are loners (if not cannibals). LPSOs mate as often as daily, and females lay eggs over months; in most other species, females die after raising one brood. And though most octopuses couple warily, at arm’s length, LPSOs mate with the beaks on their undersides pressed together, as if kissing (above).

With all those revelations from just one species, imagine what’s still to be discovered. More than 300 octopus species are believed to inhabit Earth’s oceans, and many have never been studied.