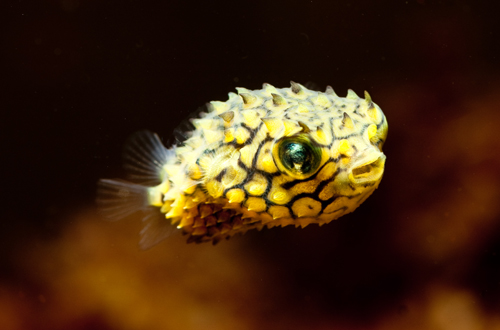 The striped burrfish, Chilomycterus schoepfii, is one of the most common warm-water fishes to show up in our seine nets during Long Island’s brief collecting season. Sometimes referred to as the spiny boxfish, C. schoepfii belongs to the family Diodontidae, which includes the porcupine fish, balloon fish and other spiny puffers. As the family name suggests (Diodont = two teeth), their teeth are fused into two structures, forming what amounts to a single dental plate on the upper and lower jaw.  These plates are useful for crushing the shells of bivalves and other shelled invertebrates which make up the bulk of their diet. It’s hard to resist the temptation to take a baby burrfish home for your aquarium, but there are a few important points to consider before making this commitment. First of all, the striped burrfish is not a true “stray.” Adult burrfish actually migrate into the coastal waters of the northeastern US in late spring and spawn here. A few weeks later, their offspring begin showing up in grass beds around the same time we start seeing butterflyfishes and other tropicals. So although they prefer warm water and there are presently no regulations on their collection, you are not saving a striped burrfish by taking it home. As far as husbandry, you should also keep in mind that burrfish, like other puffers are very susceptible to Cryptocarion and other parasitic protozoans, which can be problematic in a community tank, especially if the tank includes invertebrates that cannot tolerate medicines that are effective against protozoans. One final point is that burrfish quickly become voracious and indiscriminate feeders in an aquarium and will often eat their smaller tank mates. Puffers are among the most highly-evolved and intelligent fishes, so if you’re prepared to handle these challenges, C. schoepfi can make for an incredibly interesting and entertaining specimen. 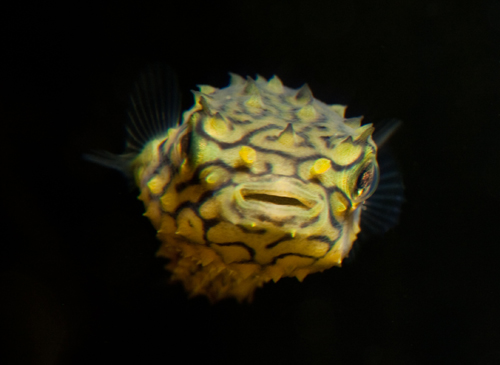