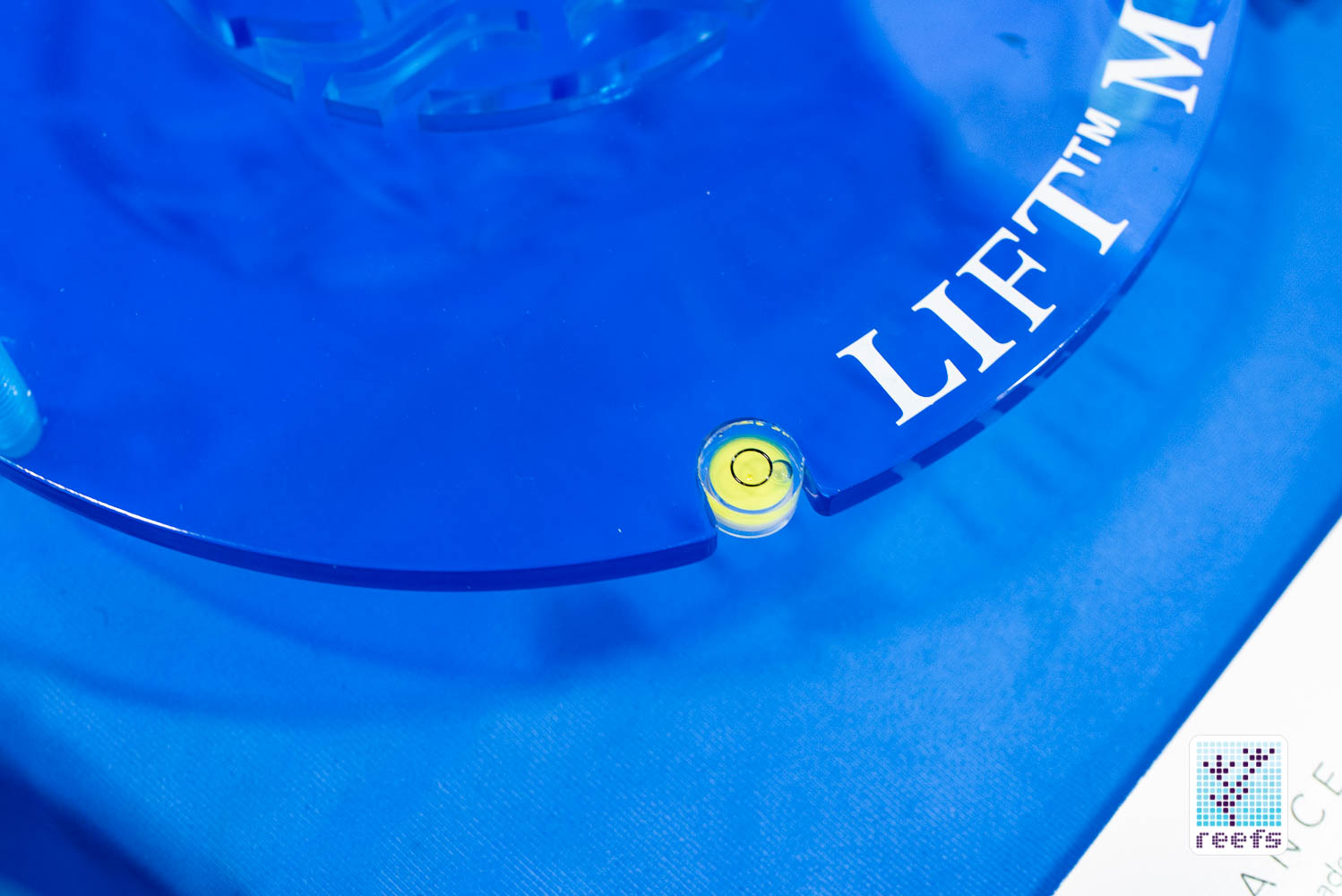 Eshopps is unique among reef tank equipment manufacturers; at every show they attend as vendors, a new, useful gadget or a fresh piece of technology is unveiled. The last time I visited their booth, at 2017 MACNA, the big announcement was their two new lines of skimmers, the S-Series and the X-Series. A little less than a year later, I had another opportunity to see new things from Eshopps and to once again be amazed by the clever gear they brought to New York.

Not all the things I was shown at the Eshopps booth were brand new items, but this was the first time I saw them in person and I feel obligated to report back to you about the full experience. 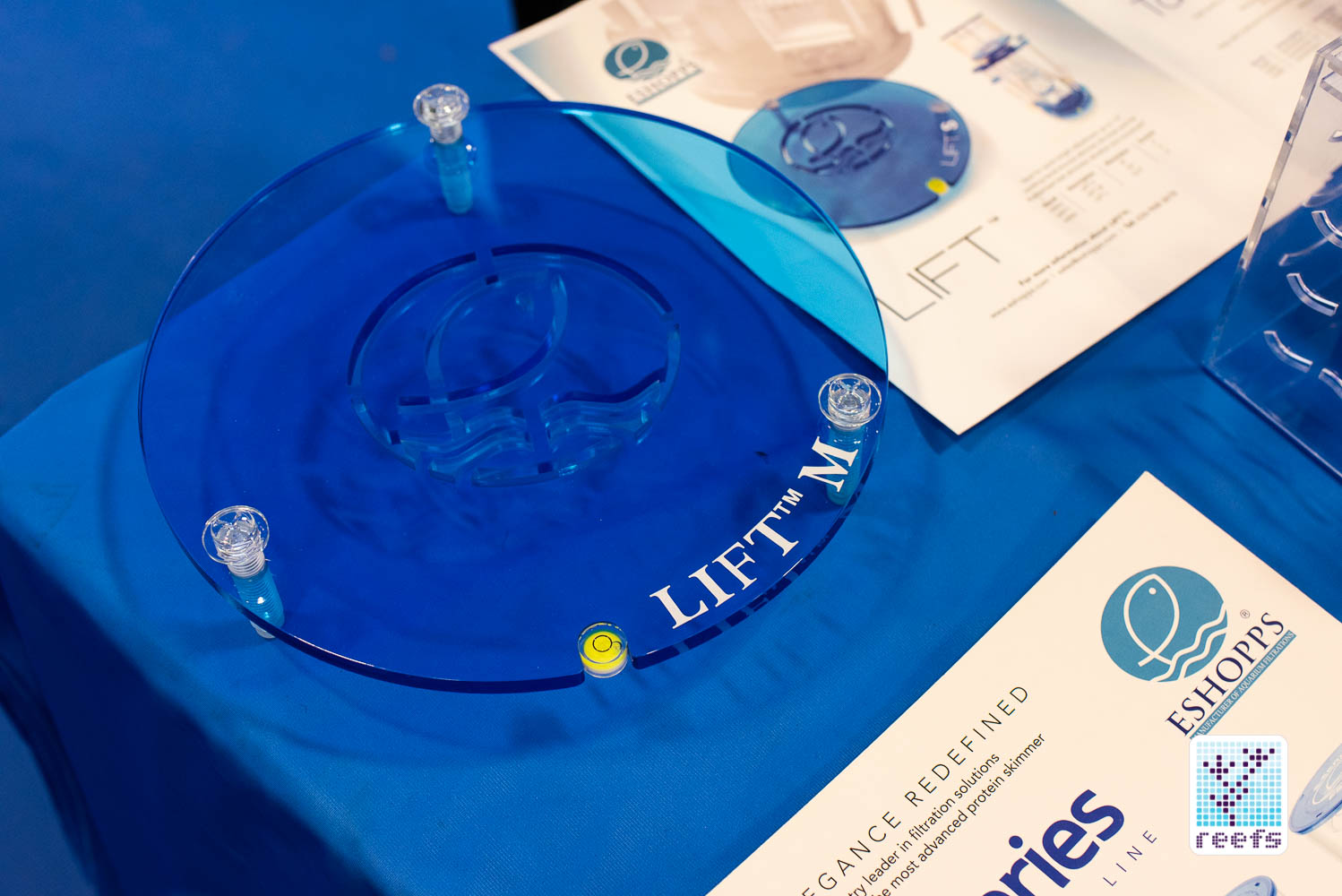 The first item is as straightforward as it can be and it’s called Lift. It is essentially a protein skimmer stand, for situations where lifting the skimmer body helps in achieving optimal skimmate. Being an Eshopps product, Lift isn’t just a piece of acrylic the skimmer stands on- the designers put some real thought into this seemingly simple product. Lift has three adjustable legs and a bubble level that together function as a way to level and stabilize the platform. On top of that, the Lift legs, equipped with soft rubber footings, double as a vibration reduction device. Lift will be sold in three sizes, 8 inch, 10 inch, and 12-1/2 inch diameter disks. 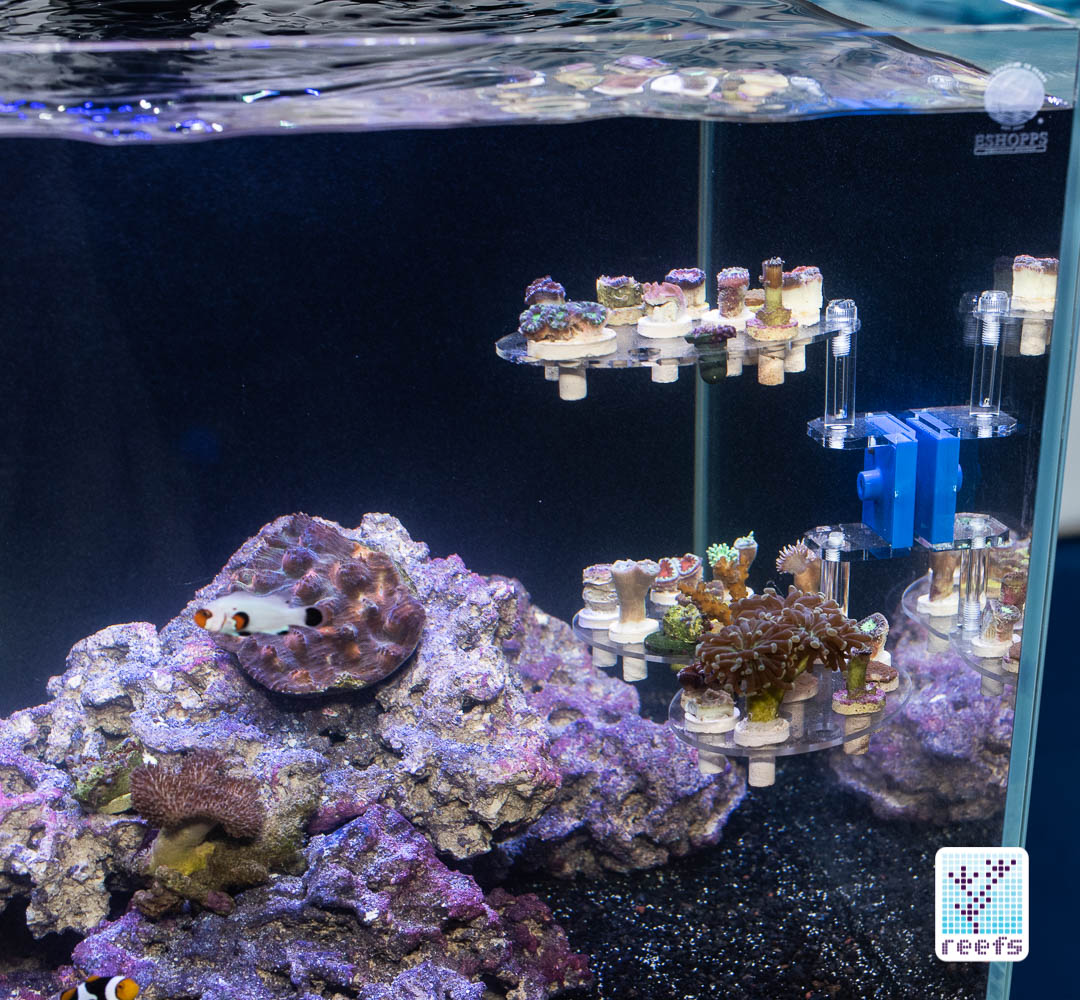 Last year, I wrote about the nifty frag rack Eshopps invented and named Lotus. In that review, I concluded that Lotus is a great space-saving frag rack best suited for frag tanks. I couldn’t find space for it in my display tank, because the base would not fit between the man-made rock I am using. Additionally, I didn’t like the idea of having an acrylic frag support right in the middle of my rock work. Well, I guess I was (telepathically) heard, as Eshopps introduced the second version of Lotus- Lotus Mag. 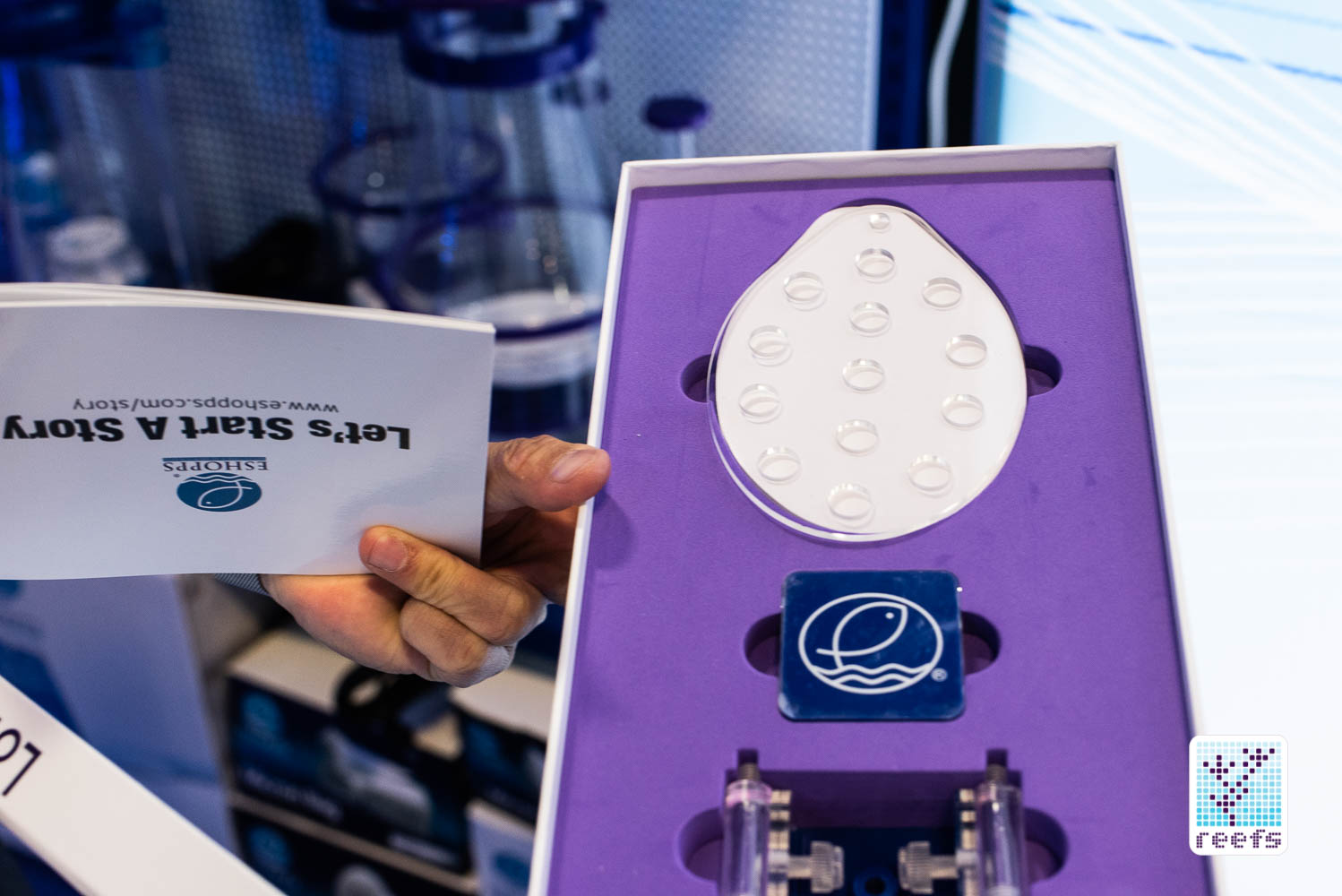 Lotus Mag differs very little from the original in terms of shape, materials used, and functionality, but Eshopps designed Lotus Mag to be hung on the walls of display tanks and so they exchanged the screw in the acrylic base of the original for a strong magnetic bracket that can be affixed anywhere on the tank’s panels. 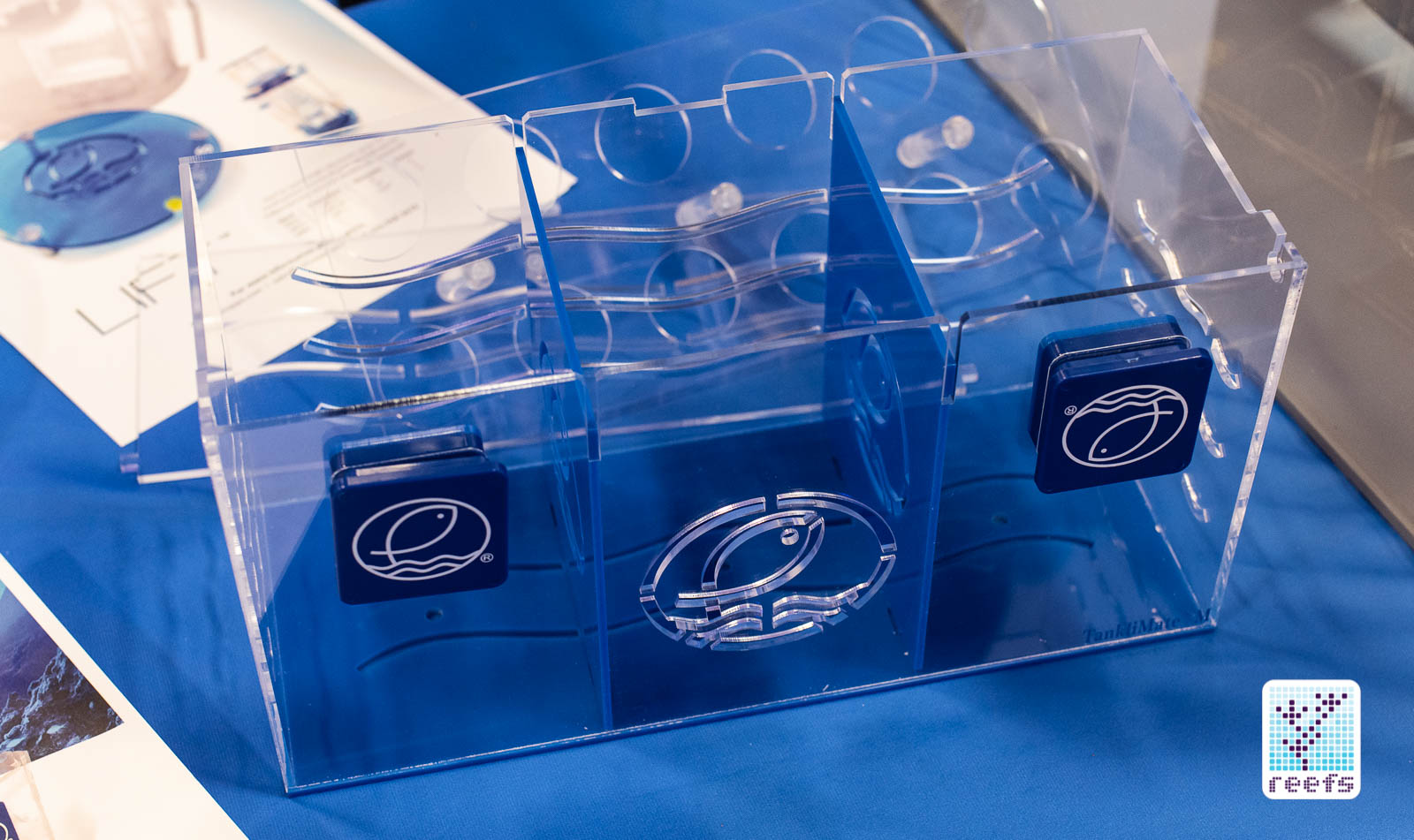 I’ve left the most exciting new Eshopps product (and one I would definitely use in my own reef tank) for last. It’s called TankliMate and I would describe it an acclimation box on steroids.

I personally use an acclimation box and have had great success in using this method to introduce new inhabitants to an established aquarium. I own a hinged version of an acclimation box, which means it is designed to be hung from the top of the tank’s glass, but since I mainly introduce wrasses to my aquarium, I want to be able to move the box around the tank so that my fish get tricked into thinking the new guy is invincible in whatever part of the tank it occupies. This forced me to retrofit an unused magnetic algae scraper to hold the acclimation box suspended in the water column. Eshopps has solved this problem with two magnetic mounts on the TankliMate. The duo of magnets securely holds on a glass up to ½” thick and allows the bracket to be moved freely around the tank.

TankliMate also comes with removable dividers (only the Medium and Large versions) and an opaque bottom, which is helpful in mitigating stress when the fish is being introduced to the reef. There will also be kits available that allow the user to transform the acclimation base into a sort of refugium or frag tank. See pictures below: 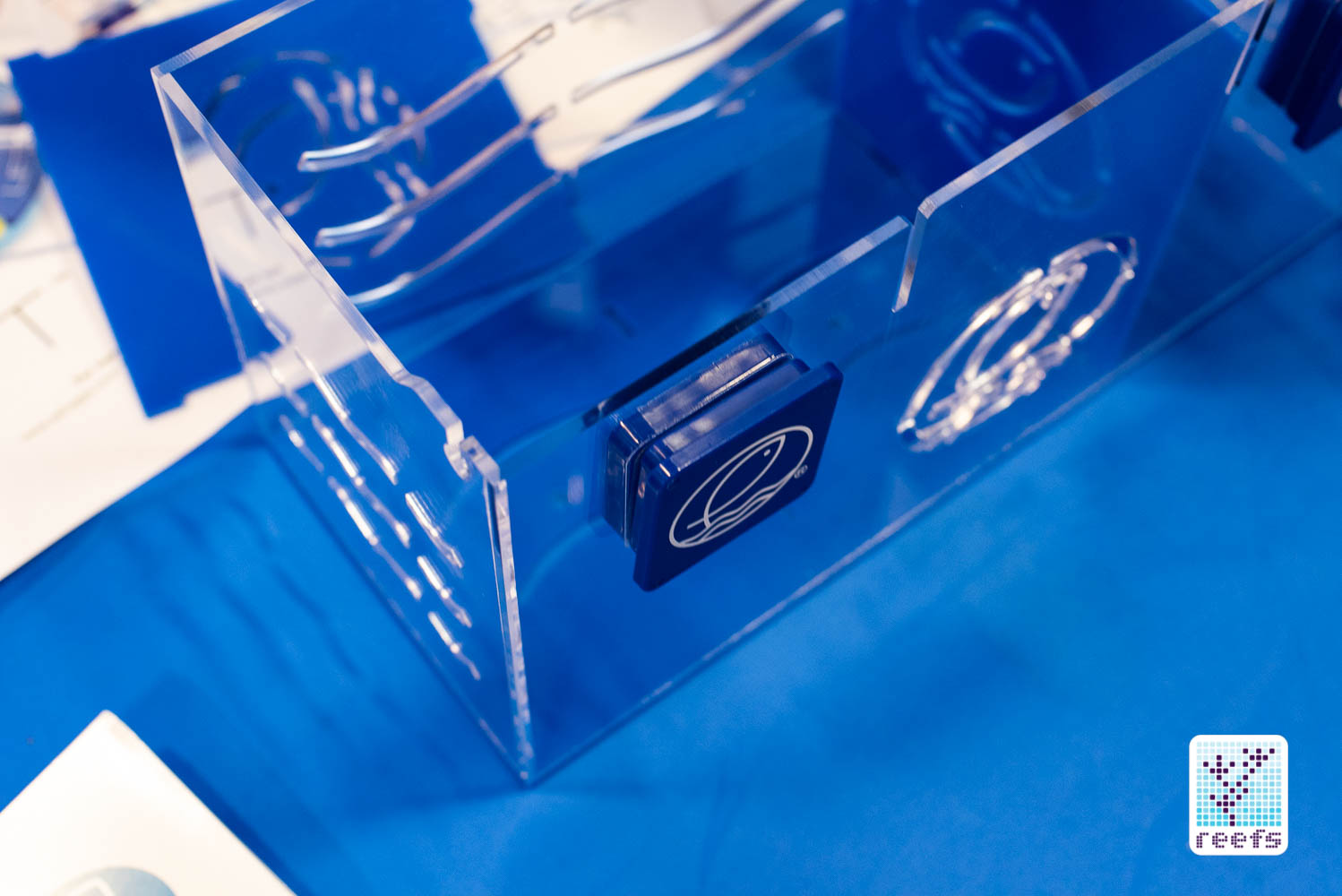 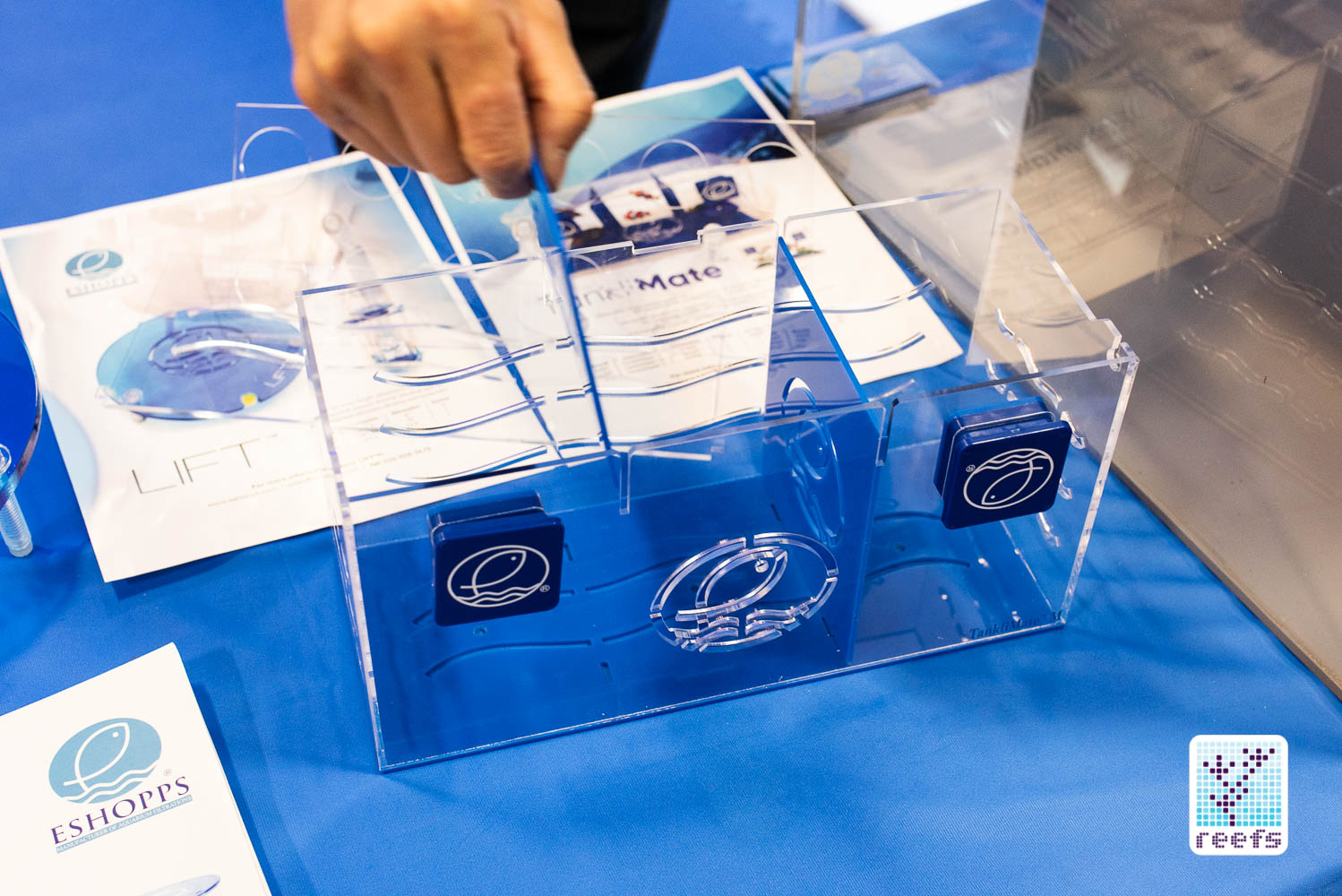 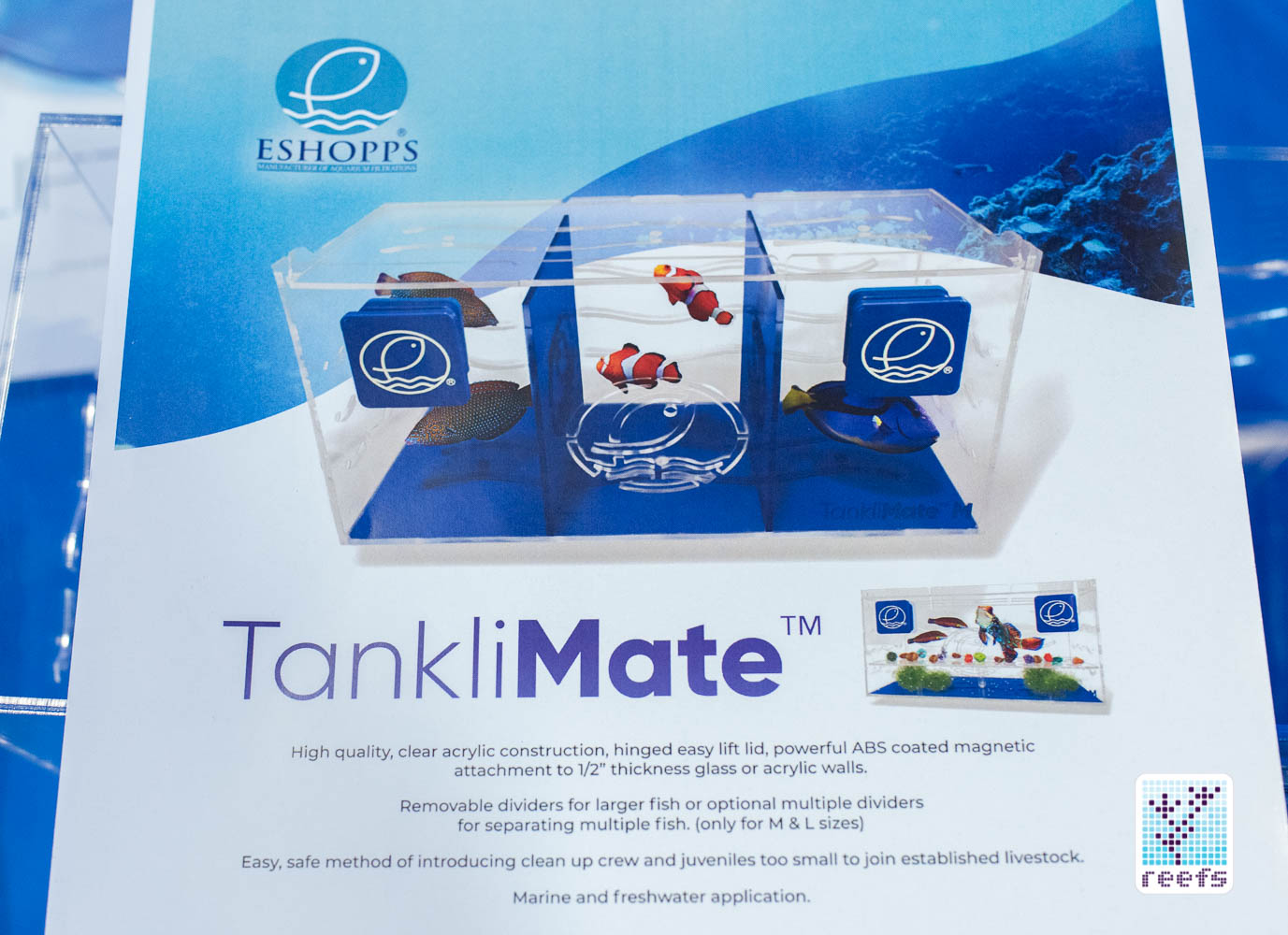 It was really nice, as always, to talk to the nice gentleman at the Eshopps booth and to be presented with the newest gear they offer. Learn more at: http://www.eshopps.com/

Thanks again for reading!